Drinking the Electrolyte? Audi Plans to Sell 800K EVs in 2025 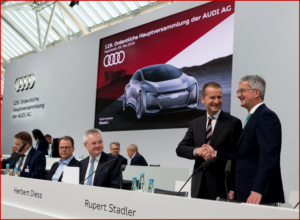 This overall plan is also called roadmap E. Following this route will considerably increase investment, making the expense side of the spreadsheet the corporate equivalent of gas guzzlers.

Audi claims it aims to sell ~800,000 fully electric cars and plug-in hybrids in the year 2025. Last week at the Annual General Meeting of AUDI AG, the Board of Management updated “Audi.Vorsprung.2025.” Vorsprung – roughly translated – means lead or advantage. We’ll see what the exact meaning is ultimately…

This regulation-prompted strategy – searching for an advantage and customers – means every third buyer or leasee would take an e-model by the middle of the next decade – customers who have thus far shunned driving “green vehicles” at this level of participation. During 2017 Audi sold 1.9 million vehicles globally. Do the math and that means a huge shift in the market. In the U.S. during 2017 Audi sold 227,000 vehicles.  During the last Japanese fiscal year ending in March of 2018, the Nissan Leaf, arguably the most affordable long-range EV with 150 miles on a full charge, sold ~55,000 units – globally.

This overall plan is also called roadmap E in Audi speak. Following this road will considerably increase investment, making the expense side of the spreadsheet the corporate equivalent of gas guzzlers. Maybe it should be called Roadmap Expensive. Indeed, Audi says that by 2025, approximately €40 billion of stockholder money is to flow into strategic areas such as e-mobility, autonomous driving and digitization. This also includes the digitization of manufacturing. With big investments in Audi’s German plants in Ingolstadt and Neckarsulm, as well as a commitment for job security until the end of 2025.

Should the products in the proposal be called red ink mobility solutions? There are planned electrified alternatives in each model series. Most of are to be fully electric, with a smaller number of plug-in hybrids. The investments required of billions, yes billions, of euros. Means that if I were a director at Audi, I would be sleeping uneasy given the current sales data on electrified vehicles of all types. They are insignificant factors in the profitability of automakers.

Audi adopted its so-called Action and Transformation Plan late last year. Virtually identical to the dreams of other automakers, it is searching for new revenue sources, cutting costs and accelerating the corporate transformation to new business models. In short, Audi wants to be a mobility company. Who doesn’t?

“Our ambition has always been and will continue to be Vorsprung durch Technik,” says Rupert Stadler, Chairman of the Board of Management of AUDI AG. “Our goal is to revolutionize mobility. In electric mobility, we want to become the Number 1 among the premium manufacturers – with full suitability for everyday use, no compromises, top quality and driving pleasure for the customer. With our technological excellence, we are utilizing our Vorsprung and lifting electric mobility to the next level.”

This will be closely followed by competitors and the trade media. The production version of the Audi e-tron prototype is the first result of the Roadmap E initiative. Audi promises more than 20 electrified models in rapid succession until 2025. In 2019, the Audi e-tron Sportback will be the second fully electric car to be launched, followed by the Audi e-tron GT from Audi Sport in 2020. Audi will also offer an electric model in the premium compact segment in 2020.

For its Roadmap E, the company is making systematic use of two major Volkswagen Group systems. In addition to the Modular Electric Toolkit developed by Volkswagen for the compact segment, Audi and Porsche are working together to implement the premium-architecture electrification for mid-range, full-size and luxury-class electric cars. These cooperation projects might reduce development costs substantially. For the customer, it means a quickly available choice from a broad portfolio for emission-free driving if it works

With electric mobility, Audi claims it is taking a resource-conserving approach also to production: In Brussels, the Audi e-tron is the first premium car to be produced in certified CO2-neutral high-volume production. Following Brussels’ example, Audi will make all its production sites worldwide CO2 neutral by 2030.

At the market launch of the e-tron, customers in Europe will have a high-performance charging infrastructure. Audi is making a significant contribution to the development of that infrastructure through the Ionity joint venture. The production version of the Audi e-tron will be the first car that can be charged at rapid-charging stations with up to 150 kilowatts. This will make the electric SUV ready for the next long distance in just under 30 minutes. Its lithium-ion battery provides a range of more than 400 kilometers in the WLTP driving cycle.

For the first time, the production version of the e-tron prototype offers Audi customers the possibility to flexibly book functions such as driver assistance systems or infotainment features after the vehicle is bought. More digital content and services will gradually be made available to the passengers. Audi aims to generate operating profit of €1 billion with such new business models by 2025.

“Just in time for the 50th anniversary of Vorsprung durch Technik, we will also present our first autonomous electric car based on our Audi Aicon show car in 2021. An interurban shuttle with lounge character – initially in a pilot fleet and around the middle of the decade as a series production car for automated driving,” says Peter Mertens, Member of the Board of Management for Technical Development at AUDI AG.

“Worldwide, we are accelerating the implementation of new, profitable business models in those areas that will be essential for our industry in the future,” says Alexander Seitz, Member of the Board of Management for Finance at AUDI AG. “Since January, we have implemented the first measures of the Action and Transformation Plan amounting to a low three-digit million figure. Identified measures will have a sustained effect and a long-term impact on revenue and costs. We will therefore gain the greatest benefits as of 2020, when our plan unfolds its full power, yielding a total of €10 billion by 2022. Audi will thus be able to secure its strong profitability despite high levels of investment.”