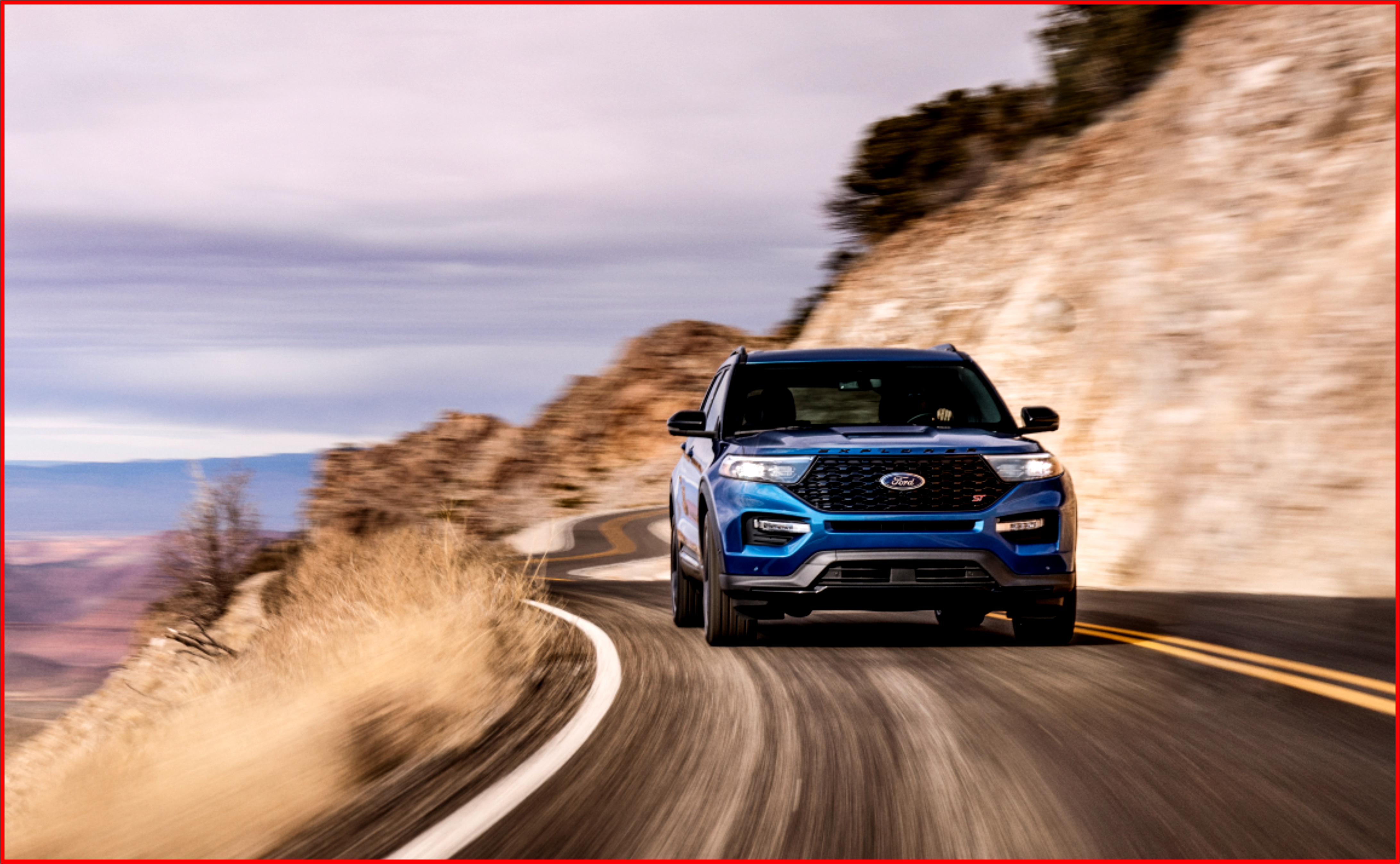 As the Mass grows in the F=MA Newtonian equation, so does the Force required. This translates to a lot of power consumed just getting the SUV moving and keeping it relocating. Some EPA ratings are pending so key factors in affordability, the ownership journey and resell value are unknown.

The new 2020 model year Explorer is a 4300-4700 lbs. 6-passenger unibody truck, with stronger construction, the broadest model lineup ever, more powerful EcoBoost engines and increased towing capacity. Powertrain offerings now include a 3.0-liter turbocharged V6 projected to produce 365 horsepower and 380 lb.-ft. of torque using 93-octane gas, making this the most powerful Explorer ever. It’s also the most expensive, most complex Explorer ever, even though the all-new rear-wheel-drive and AWD platform is shared by the Ford Police Interceptor Utility and the all-new 2020 Lincoln Aviator* and upcoming revisions to the Mustang.

Two days of driving the new Explorers on and off-road in Oregon show it to be capable, well-mannered via its electronic controls, and big, oh so big. This becomes apparent in the ‘performance’ ST model, which is the antithesis of a maxim from the man who designed the Ford Trimotor airplane: Simplicate and add lightness. This in the past has well served many an engineer or designer or racer.

As the Mass part grows of the F=MA Newtonian equation, so does the Force required, which translates to a lot of power  consumed just getting the SUV moving and keeping it relocating. Some EPA ratings are pending, so key factors in affordability, the ownership journey and resell value are as yet unknown. Quality on a new vehicle at Ford is also well-known previous problems.

The Explorer lineup now has Standard, XLT, Limited, Limited Hybrid, ST and Platinum models. To take the sting out of the newly raised prices, Explorer comes with a dozen new standard items for $400 more than the previous model Ford says. Standard equipment includes a power liftgate, 2.3-liter EcoBoost engine with an all-new 10-speed transmission, 8-inch digital touch screen with SYNC 3, and FordPass Connect Wi-Fi service for up to 10 devices. Price as of this writing will be the Explorers biggest marketing problem.

The pricing also begs the German question – at these levels is it time to look at Mercedes-Benz or BMW for a crossover or for that matter the high-quality Japanese? General Motors has plenty of offerings as well. Time and showroom traffic – and above all transaction and leasing prices – will tell. The sleeper here might be Subaru with its many AWD choices.

The Ford Explorer – America’s best-selling SUV over the last 29 years – has the widest model lineup ever, more powerful and EcoBoost engines and new technology that hints of aspects of autonomous vehicles to come. Vehicles equipped with a 3.0-liter V6 EcoBoost and the towing package can haul up to 5,600 pounds; those with a 2.3-liter EcoBoost and a towing package can tow up to 5,300 pounds. When properly equipped, Explorer Hybrid is rated to tow up to 5,000 pounds.

The all-new Explorer ST, the newest SUV from Ford Performance, is the most powerful Explorer ever. It has a tuned 3.0-liter EcoBoost engine rated at 400 horsepower and 420 lb.-ft. of torque. It has a targeted top track speed of 143 mph with high octane fuel. Since I was on public roads, there was no legal or sane way to verify this claim, but it seems possible even with its brick-like aerodynamic shape.

The all-new Explorer Limited Hybrid is intriguing. It’s designed to offer performance and capability in a fuel-efficient package. The rear-wheel-drive model is projected to have an EPA-estimated range of at least 500 miles per 18.6-gallon tank, but Ford – enmeshed in the Ranger emissions non-compliance matter – doesn’t have EPA ratings yet. It will be a nice marketing point if the projection proves true. The clear danger present is if the fuel economy improvement of the hybrid isn’t enough to offset the increased costs. A version of this system will appear on the F-Series pickup truck next year.

On the road the Explorer ST is responsive and well-mannered particularly in a straight, high-speed line on that increasingly elusive smooth pavement that exists in inverse proportion to the growing national debt and the lack of taxes to repair – let alone properly maintain – our aging infrastructure. The brakes are a touch grabby at low speeds, and the weight – including the unsprung weight from the attractive 20-inch machined aluminum wheels and giant tires are always along for the ride.

The Explorer Hybrid I drove was not the state of the art when it comes to the sophistication of its calibration. This is evident in stop/start city driving where there is a noticeable lurch on launch. The performance feel is better in the mid-range from ~30 mph to 70 mph where the additional power provided by the electric motor is less evident – it can add 221 pounds-feet of torque, and is capable of 30-50 miles of all-electric driving depending on conditions. It should be noted that there is no compromise in the six- passenger interior or the luggage space from the hybrid accouterments.

Franky the EcoBoost engines – the base turbocharged 2.3-liter four-cylinder or the turbocharged 3.0-liter V-6 of the Limited and ST – might be more satisfying choices. Consider a 2020 Ford Explorer AWD 2.3-liter 4-cylinder, Automatic (S10), Turbo, Regular Gasoline has an annual fuel cost of $1,750 – $100 more than the RWD model!

Available on the 2020 Explorer are impressive contemporary Driver-Assist Technologies that are perfect for an aging population:

Other optional Co-Pilot360 technologies include Evasive Steering Assist, which provides steering support to help avoid a collision; and Post-Impact Braking that provides braking after a collision to lessen injury and damage caused by a secondary crashes.

Explorer also has optional Intelligent Adaptive Cruise Control with Speed Sign Recognition. In addition to automatically slowing when traffic ahead slows and helping keep the vehicle centered in its lane, the system uses cameras to read speed signs and, combined with the optional navigation system, adjusts cruise control settings accordingly.

Also, Reverse Brake Assist and Active Park Assist 2.0, which handles all steering, shifting, brake and accelerator controls during a parking maneuver with a touch of a button. Optional but standard on Platinum, It uses radar and ultrasonic sensors to detect an object in Explorer’s path and can apply the brakes automatically to avoid an imminent collision when the vehicle is backing up at a low speed (1 to 7 mph) – such as when exiting a driveway.

This class-exclusive item – standard on Explorer Platinum – allows the driver to park in a parallel or perpendicular spot with a touch of a button without having to work the steering wheel, gear shifter, gas pedal or brake pedal. It works well, and the calibration is sophisticated. It encourages the driver to be alert and use slight braking to control the speed. If you don’t, system braking is late and extreme enough to stop most people from texting or eating or cell phoning the next time. 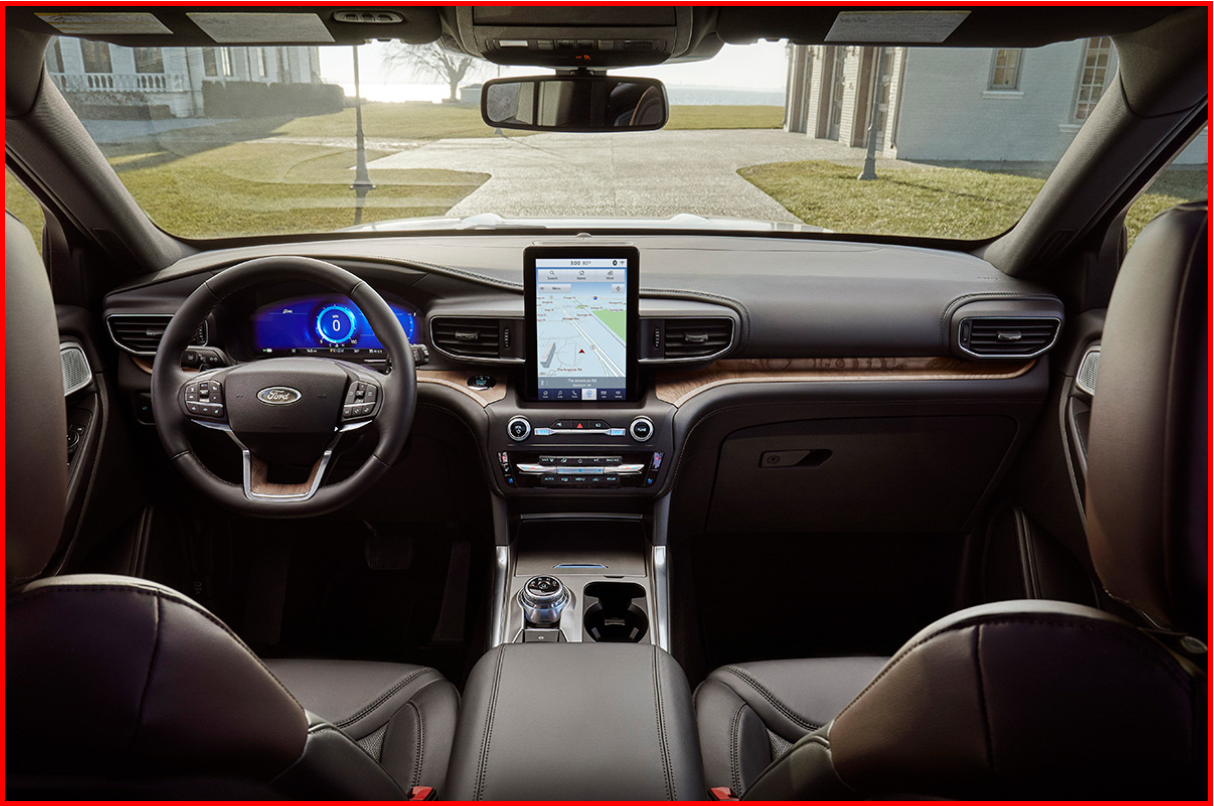 The calibration of the GPS on the unknown roads I drove was tardy for my taste when giving notice of upcoming directional changes.

An all-new but optional Terrain Management System with up to seven select-able drive modes through a dial in the center console has normal, trail, deep snow and sand, slippery, sport, tow/haul and an ECO mode. Each come with 3D animated graphics in the optional new 12.3-inch digital cluster. It works well and on initial off-road drives I was clearly not using all its capabilities. As my trust built, so did the steepness of the grades  – +20-degrees downhill, +30 degrees side slip – I was willing to take on with no concerns. Playing client driving here, I only though about a 40-degree side slip. I’ll bet 35 degrees is possible. And fording 12 inches of water was problem.

*Ford Motor Company is invested $1 billion in Chicago Assembly and Stamping Plants, adding 500 new jobs to launch three new SUVs. The renovation at the plants began last March, expanded capacity to produce the new Ford Explorer – including the Explorer ST and Explorer Hybrid – the new Police Interceptor Utility and the new Lincoln Aviator. The additional 500 full-time jobs bring total employment at the two plants to ~5,800. Ford was the No. 1 producer of vehicles in the U.S. and a leading exporter of vehicles from the U.S., building nearly 2.4 million in 2018, Ford says it employs the most hourly U.S. autoworkers. 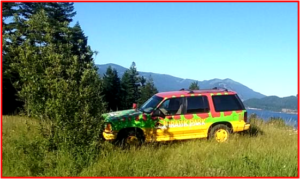 Executive Summary: The 2020 Explorer is a credible SUV offering surrounded by other strong offerings. Pricing and marketing are the potential issues. Then there’s the test drive problem – fewer and fewer prospective buyer’s actual drive a prospective new vehicle under  the conditions they will use it in. Some don’t test drive at all, preferring web-page touring to tire turning.