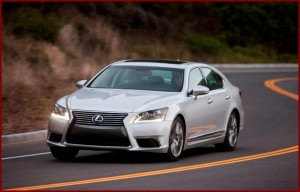 The one remaining constant taken from the proven Lexus equation is summed up by the word “more.”

This new Teutonic course comes from the Japanese luxury brand that became Number One in the all-important U.S. market because the original LS 400, ES 300 and especially the following RX 300 crossover SUV (it remains the best seller in the line) were in place just as baby boomers were ready to move up from their beloved Japanese family cars, and move up they happily did. 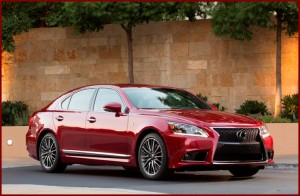 The F-Sport seems destined for limited sales, and its alleged handling attributes cannot be tested or even used prudently during everyday suburban driving.

Now, boomers are aging, possibly downsizing, and Lexus is seeking younger owners with a deliberately German approach, at least in ride and handling. Whether existing Lexus buyers garnered over more than 30 years will follow is the subject to (too) much opining among car media and competing auto executives. Many of this ilk, though, dismissed the original Lexi as not up to the German challenge.

The one remaining constant taken from the proven Lexus equation is summed up by the word “more.” No luxury brand is ever successful by offering less, but in an automotive world infatuated with ever more complicated electronic systems, the question arises when “more” actually becomes less in terms of customer satisfaction. There is evidence that this is already happening, as unhappiness about electronics and complicated connected vehicles are now major and growing categories in independent quality surveys.

In the case of the mostly invisible to the driver automatic climate-control and safety systems there are indeed “more” sophisticated technologies in the LS line, although many of the breakthroughs are optional. To cite three:

It’s not that standard equipment is lacking here. There are anti-lock brakes and vehicle dynamics control, of course, and a “Blind Spot” monitor that uses rear radar to view the side blind spots at speeds of 10 mph or more. This includes “Rear Cross Traffic Alert,” which automatically operates when the LS is in reverse, warning the driver of the approach of other vehicles when backing out of a parking place that these days is often flanked by big-pig SUVs. The rear backup camera – soon to be standard on all cars by federal fiat – is a genuine electronic safety improvement. 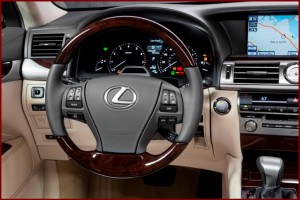 Lexus is exemplary in its use of large controls, readable typefaces and familiar operating knobs and switches.

Other automakers could take a lesson from the so-called Remote Touch system, standard on all LS models. The controls for audio and ventilation are relatively easy to read and almost intuitive to operate. Remote Touch allows the user to operate the climate, audio, phone controls and the navigation system. Menus are called up with a controller located on the center console. Large buttons on the steering wheel and instrument panel enable direct control of frequently used functions, including temperature setting, fan speed, and preset audio stations.

In an industry awash in marketing data, it is amazing how few automakers realize that people over the age of 40 need bifocals – virtually all luxury car buyers that is. Lexus is exemplary in its use of large controls, readable typefaces and blessedly familiar operating knobs and switches. The standard navigation system is displayed on a 12.3-inch, high-resolution split-screen, large enough for the simultaneous viewing of the moving map as well as other functions. It also is, alas, the latest example of technology that causes distracted driving by moving the driver’s eyes away from the road where the latest academic research shows that after only a mere second, risk increases. 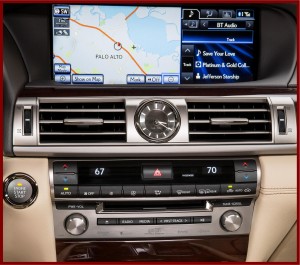 The standard navigation system is displayed on a 12.3-inch, high-resolution screen, large enough for the simultaneous viewing of a map and other functions. It also is, alas, the latest example of technology that causes distracted driving by moving the driver’s eyes from the road.

The LS passed my simple driver’s test that most new cars now fail: Upon entry I adjusted the 16-way power driver’s seat, set both outside rearview mirrors, started the engine, set the a/c, tuned the radio, and called up the navigation map without having to refer to the quick settings guide that is in the glovebox of all new cars with their overly-complicated electronics. One thing I could do without, however, is the toy-like all-LED interior lighting. It glowed as I approached the parked LS, and then faded in a light-show sequence upon engine start. Ho-hum.

What isn’t ho-hum or a mere quibble is the performance, particularly of the LS460hL – h, as in hybrid, L for long wheelbase. This rock solid, albeit heavy sedan has plenty of effortless go – 0-60 mph in 6 seconds on Woodward Avenue by my watch – from its combination of a 389 horsepower V8 engine (@6,400 rpm and with, unfortunately, premium fuel) and a 221 horsepower (165 kW 650 volts DC) permanent magnet motor that drives the wheels and is used during what is fairly aggressive regenerative braking.

Smooth, fast and very, very quiet are the attributes of this engine and CVT and they provide EPA ratings of 19 mpg city, 23 highway and 20 mpg combined. Using an abbreviated version of my normal suburban drive test loop, the trip computer was showing 23 mpg. (For comparison consider that the six-cylinder BMW 740Li is rated at 19 mpg city/28/22 and the V8 LS 460L is rated at 16 mpg city/24/19, so as always F=MA and it shows up in the weak fuel economy results, even though the LS is said to be one of the most aerodynamically efficient cars with a coefficient drag of 0.26.) 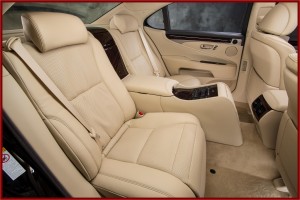 An optional “Ottoman Seating Package” has a shiatsu massage and a rear seat entertainment system with a Blu-ray DVD player, an SD card slot and a retractable, ceiling mounted, nine-inch full-color VGA screen.

That said the LS460hL is a remarkable machine. However, the bulk of the sales will come from the smaller, lighter LS 460. These buyers won’t be disappointed. The 360 horsepower 4.6-liter V8 engine and eight speed automatic transmission – with invisible shifts – just like the hybrid also provides a 6-second trip to 60 mph, although with slightly less EPA fuel economy ratings of 16 city/24 highway/19 combined on 91 octane premium fuel.

One option is recommended here, the air suspension. The standard coil spring setup combined with 235/50R18 all season tires is immediately detectable inside the cabin for its jingle/jangle and unsprung weight bouncing around. Not only does the air suspension eliminate the annoyance in the otherwise serene cabin, but also it has the added benefit of coming with variable ratio steering (11.1-17.0:1 compared to fixed 14.9:1). The system also automatically adjusts the damping forces based on driving style. The ride computer also allows the driver to select five settings dubbed Eco, Comfort, Normal Sport and Sport S+, but my experience with such systems is most people find the setting they like and rarely, if ever, change it.

The F Sport model seems destined for limited sales, and its alleged handling attributes cannot be tested or experienced prudently during suburban driving. It is instantly noticeable as a harsher suspension set-up, and the F Sport is heavier at than the LS 460 at 4,233 pounds versus 4,365 in RWD configuration. In AWD guise F Sport has a curb weight of 4,717 pounds compared to the LS 460 4,651, which likely means slower acceleration times in either version.

Frankly, I don’t get the point here. Paying more to get less comfort and slower street times in a luxury car equals less using my mathematics. However, subject to the caveat of unknown final pricing, the math does make sense on the other LS models, continuing a winning, and Japanese tradition.