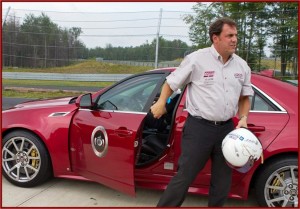 The GM President of North America, Mark Reuss, gets out of the Cadillac CTS-V after taking the car on hot laps at the Monticello Motor Club.

It’s surprising when the president of an auto company appears at a race track to drive a car he actually worked on as an engineer.

It’s embarrassing, though, when he’s as fast, well frankly faster, than any hot shoe out there.

I guess it’s not always true that all GM executives do is sit around and nitpick large PowerPoint presentations while the firm’s market share erodes. 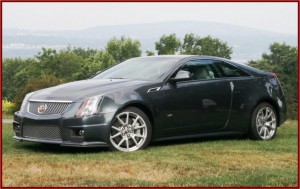 The electronic controls of the V are formidable, or in my weak German – Achtung Gebietend.

Reuss was driving a supercharged, 556-horsepower (415 kW) 6.2-liter V8 powered V-coupe that uses the same engine found in the CTS-V Sport Sedan introduced 21 months ago. And Reuss appeared to be extracting almost all of the performance possible from both versions of the car – sedan or coupe – in a show of hardware enabled driving prowess.

Engineer though Reuss be, and also the former head of GM Performance, which is responsible for such cars, the Caddy Coupe actually owes its existence – improbably – to a design staff concept done without the usual – stifling – beanie business case. The angular masterpiece was just too seductive for the now long retired but then product king Bob Lutz to resist.

Although it draws from its sport sedan sister, the CTS Coupe shares only the instrument panel, console, headlamps, front fenders and grille. Riding on the same 113.4-inch wheelbase, the CTS coupe is two inches lower, has a two-inch wider rear track, and a shorter two-inch overall length than the sedan. The two, two and two might add to six in conventional beanie math, but in my calculation this roll of the dice adds to seven, a big fat lucky seven.

This lovely looking rear-drive CTS-V can actually run with the world’s best – a wolf in Cadillac’s “arts and science” exterior clothing. An all-wheel drive version is also available, though not tested here, but I’ll wager it will make the point as well.

While horsepower makes for good advertising copy, it’s torque that makes this a driver’s high performance machine. The 551 lb.-ft. (747 Nm) of torque from the V8 – the most powerful engine in Cadillac’s history – is so strong that it makes the car very easy to drive – or is that Veasy?

Don’t carry enough speed into a corner? No problem, wait for the exit point to align and get back in the throttle all the way. Admittedly, not the smoothest of styles, but the brisk acceleration of the V will bring you more muscular smiles per lap than any other performance car at its $63,000 price, or even ones that are priced significantly higher.

On the street, passing is effortless. Pull out, get on the throttle for a moment and blow by the moving roadblock that you can now forget. Only drawback here? EPA ratings of 12 mpg city, 18 highway. Driven reasonably, but not moderately, I showed 14.5 mpg and an average speed of 34 mph on rural roads. No point of looking at the mileage at the track.

In addition to improved overall efficiency, this supercharger has benign noise and vibration characteristics compared to ordinary designs. I couldn’t discern its operation at any engine speed.  In fact, the only noticeable noise in the V’s snug cockpit comes from the giant Michelin Pilot Sport PS2 performance tires – P255/40ZR19 96Y front, P285/35ZR19 99Y rear. Tires capable of hanging together at hyper speeds invariably are noisy, and a tad harsh.

Two six-speed transmissions are offered in the CTS-V Coupe: a Tremec TR6060 six-speed manual with a dual-disc clutch and a Hydra-Matic 6L90 six-speed automatic with steering wheel mounted shift controls.

“Performance Algorithm Shifting” is part of the automatic’s programming. It provides an aggressive shift pattern during sustained high-performance driving. As with many current models, the driver needs only to slide the shifter into the manual “gate” to put the transmission into that more aggressive mode. The paddle shift control – behind the steering wheel, is easy to use, and requires no shift lever selection. Steering wheel thumb controls allow quick tap up/tap down gear selection.

There are also other factors at work that allow me to say “easy to drive.” The electronic controls of the V are formable, or in my weak German – Achtung Gebietend. Consider that StabiliTrak, an advanced electronic chassis control system, is standard.

Then there’s Magnetic Ride Control, also standard. MRC is said to be the world’s fastest-reacting suspension technology. It uses dampers controlled by magneto-rheological technology in place of conventional fluid and valves inside. The fluid is a suspension of magnetic iron particles in a synthetic solution. The fluid’s consistency is changed through electronic current, resulting in continuously variable, real-time damping. This accelerates response time and in theory allows for greater precision.

Electronic sensors at all four wheels literally “read the road” every millisecond, making constant adjustments to damping to create virtually instantaneous and extremely precise control of body motions. The Magnetic Ride shocks also enable a broader range of damping control to optimize the ride and handling for all driving conditions. In the CTS-V Coupe, an extra measure of control is offered, with two selectable modes – Tour and Sport – enabling the driver to tailor the suspension for grand touring or more spirited performance driving.

It’s been a long, long time since Cadillac had as formidable a halo car as the performance version of the coupe. In fact, it now has two excellent V versions of the angular CTS – two- or four-door configurations.

The coupe is the faster one with a zero-to-60 mph acceleration of under 4 seconds, and giant Brembo brakes to take you back to zero again when you step on the whoa pedal. Top speed of the V is said to be more than 190 mph, something I didn’t confirm myself.

So watch out BMW M5, Mercedes E63 AMG, Audi RS5 or even the RS6 when it comes to the U.S. (There really is no direct comparison here, but the V Coupe is roughly the size of a 5-series BMW, but priced at the smaller M3.)

The only thing that is going to hold back the V coupe is a lack of consideration among potential buyers, who are longtime offshore gazers for the latest thing on the automotive horizon. It’s time for them to look inland at some Detroit hardware, well actually Lansing-built wheels in this case, once again.