Dueling Sales Forecasts for March. Up or Down? 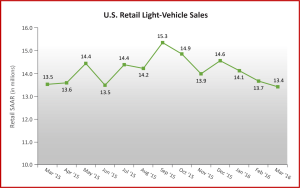 Dueling sales forecasts for March see the industry up or down. New-vehicle sales are expected to increase 8% year-over-year to a total of 1.66 million units in March 2016. This means an estimated 17.2 million seasonally adjusted annual rate (SAAR), according to Kelley Blue Book.

New-vehicle retail sales in March are expected to be -2% lower than a year ago on a selling-day-adjusted basis, the first time there has been a year-over-year decline in sales since August 2010, according to J.D. Power.

The conflicting numbers are because of a technicality. Two additional selling days help this month’s volume  as the SAAR will stay relatively consistent with recent months. Kelly relies on a monthly total. J.D. Power adjusts for selling days. Nonetheless, March at 1.6 million light vehicle sales sees the SAAR  for retail sales in March 2016 at 13.4 million units, down slightly from 13.5 million in March 2015.

“The industry continues to maintain its momentum in March as we expect the highest volume of any month in more than 10 years,” says Tim Fleming, analyst for Kelley Blue Book.  “However, we continue to follow indicators that demand for new cars is weakening, while there is increased incentive spending and an increasing share of fleet sales.”

The 1.66 million units if accurate brings the Q1 total to 4.15 million, up 5% year-over-year – the second highest first quarter on record, surpassed only by Q1 2000. This also could be the highest March sales total since 2000, when sales also hit 1.66 million units, and the highest volume total of any month since July 2005.

J.D. Power says that with average transaction prices of $30,800, consumer spending on new cars will exceed $40 billion, a first for the month of March. The previous March record was $37.5 billion in 2015. Lease penetration through March 20 is 30%, a record level for the month of March but down from 32% in February.

“Sales are being supported by a number of factors, including incentives, elevated leasing and long-term loans. While these factors are delivering benefits to the industry by enabling record revenues, we need to be mindful of the risk they pose to the long-term health of the industry,” says Deirdre Borrego of Power.

Ken Zino is an auto industry veteran with global experience in print, broadcast and electronic media. He has auto testing, marketing, public relations and communications expertise garnered while working in Asia, Europe and the U.S.
View all posts by Kenneth Zino →
This entry was posted in sales and tagged autoinformed, autoinformed.com, j.d power, kelley blue book, Ken Zino. Bookmark the permalink.