Manufacturing employment rose by 37,000 in March with slight gains in the auto industry.

Employment rose by a mere 120,000 in March, and the unemployment rate was unchanged at 8.2%, according to the U.S. Bureau of Labor Statistics. The jobless recovery in the U.S. economy continued since job creation was half the feeble amount of the previous three months.

Employment increased in manufacturing, food services and drinking places, as well as health care, but was down in retail trade. Government employment was unchanged. The job growth was far below that needed to return the U.S. to full employment and re-employ the millions of long-term unemployed, which remain at a post- Great Depression high.

Some independent estimates have the real U.S. unemployment levels at 14% or more, as politicians in a dysfunctional Washington try to cast the blame on the other party. One thing is certain; unemployed do not pay payroll or social security taxes, at a time of soaring deficits. 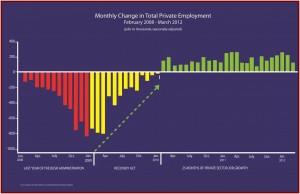 Since April 2010, the number of long-term unemployed has fallen only by 1.4 million. The civilian labor-force participation rate (63.8%) and the employment-population ratio (58.5%) were little changed in March.

The number of persons employed part time for economic reasons (sometimes referred to as involuntary part-time workers in cold bureaucratic language) fell from 8.1 to 7.7 million over the month. These individuals were working part time because their hours were cut or because they were unable to find a full-time job.

In March, 2.4 million persons were “marginally attached” to the labor force, essentially unchanged from a year earlier. These individuals were not in the labor force, wanted and were available for work, and had looked for a job sometime in the prior 12 months. They were not counted as unemployed because they had not searched for work in the 4 weeks preceding the survey. Among the marginally attached, there were 865,000 discouraged workers in March, about the same as a year earlier 120,000 in March.