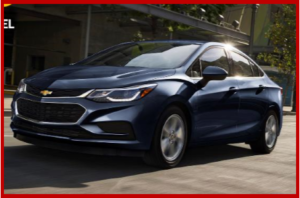 The 2017 Cruze Diesel Sedan is rated EPA-estimated highway mileage of 52 mpg, the highest highway fuel economy of any non-hybrid/non-EV in America. Based upon the EPA highway estimate, your mileage may and almost certainly will vary.  With the six-speed manual transmission  it has an estimated range of up to 702 highway miles on one tank of diesel fuel. The previous version was rated at 46 mpg. Since the 2014 model year 7570 Cruze diesels have been sold. To put that in perspective, during January of 2017 ~20,000 Cruzes were sold. (Chevrolet Cruze Diesel Rated at 46 MPG Highway, 2016 Chevrolet Cruze Debuts in Detroit, Un-Sweet Tweet – Trump Outburst Against Chevrolet Cruze)

Given the Volkswagen dieselgate scandal, a large question remains about its sales potential. Even in Europe with subsidized fuel prices diesel sales are dropping. In the U.S.  hybrids and super-efficient gasoline powered vehicles rule the roads. Also, given the talks GM is having with PSA over selling Opel – the engineering source of the engine – it future could be in doubt. (General Motors to Sell Opel Vauxhall and Leave Europe?,  European Diesel Car Sales Continue to Decline)

“Chevrolet is dedicated to offering customers a wide range of propulsion options. We know there are customers looking for the right combination of fuel efficiency, driving dynamics, fuel type and more.” said Steven Majoros, director of Chevrolet Marketing.

Ken Zino is an auto industry veteran with global experience in print, broadcast and electronic media. He has auto testing, marketing, public relations and communications expertise garnered while working in Asia, Europe and the U.S.
View all posts by Ken Zino →
This entry was posted in fuel economy or emissions, news analysis and tagged autoinformed, autoinformed.com, Cruze Diesel sedan, dieselgate, Ken Zino. Bookmark the permalink.