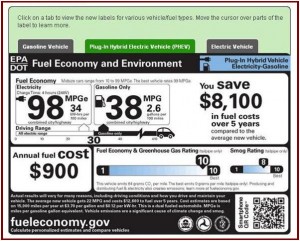 The U.S. Department of Transportation and the U.S. Environmental Protection Agency today unveiled new fuel economy labels that, it’s said, will help consumers understand the more stringent fuel economy and greenhouse gas emissions standards that are being phased in during the next five years.

Starting with model year 2013, the revised fuel economy labels will be required on all new passenger cars and trucks – both conventional gasoline or diesel powered and “next generation” cars, such as plug-in hybrids and pure electric vehicles. New vehicles such as hybrids and electric cars without question require more sophisticated labels than the simple EPA mpg ratings developed more than 30 years ago.

The Energy Independence and Security Act of 2007 passed under Republican President Bush specifically said that EPA and DOT must rate available vehicles according to fuel economy, greenhouse gas emissions and smog forming pollutants, which the new labels do. No automaker issued a statement in support of the new labels, which show how much CO2 a vehicle emits.

The significantly redesigned labels also will provide more fuel efficiency information, including estimated annual fuel costs, savings over a five-year ownership period, as well as data on each vehicle’s environmental impact compared to all other vehicles.

However, the new label sticks with the well known and misleading, miles per gallon ratings. More valuable gallons or liters per mile ratings are already available on the EPA website. (http://www.fueleconomy.gov/) This mpg rating is misleading when if you compare numerical fuel economy improvements instead of actual fuel costs. There is a non-linear relationship between gallons used over a given distance and miles per gallon. The fuel savings, in gallons, for a vehicle that gets 10 MPG versus a vehicle that gets 15 MPG is about 33 gallons per 1000 miles. The fuel savings in gallons, for the same 5 MPG fuel economy improvement for a 30 MPG versus a 35 MPG vehicle is only about 5 gallons.

This is the first major change since the EPA label program began and it now provides detailed comparative information of fuel costs and fuel savings among models, which in theory will pressure automakers to become more efficient. There’s even a “QR Code” that will allow users of smartphones to access online information about how various models compare on fuel economy and other environmental and energy factors. This tool will also allow consumers to enter information about their typical commutes and driving behavior in order to get a more precise estimate of fuel costs and savings.

In a significant improvement in consistency, the new label eliminates the separate label currently required by California.

One thing the new label does not provide is the previously proposed letter grade – A+ through D – for individual models. In its place is a 1-10 number rating. (See EPA to Stigmatize Gas Guzzlers with a D Grade?)

These improvements in data will certainly give consumers more complete information to consider when purchasing vehicles that will be covered by the newly increased fuel economy standards.

After taking office in 2009 President Obama – prompted by a Supreme Court decision affirming that the Clean Air Act did indeed cover greenhouse gases – directed DOT and EPA to speed development of fuel efficiency and greenhouse gas emissions standards on a national basis. The previous Bush Administration had declined to do so, leading to lawsuits from environmental groups and potentially causing chaos and economic harm to automakers and the U.S. economy.

Automakers and more recently heavy truck makers are in favor of national standards for fuel economy, rather than being confronted with California standards that differ from the majority of other states, which adds expense and unneeded complication to vehicle development, warranties and servicing.

The first significant movement in this direction occurred under the Obama Administration with its landmark 2010 national fuel economy rule, developed with input from automakers, environmental groups, and the states, with California leading the way. The new CAFE regulation increases the energy efficiency of cars and trucks built in model years 2012 through 2016 to an average of 35.5 mpg, with cars needing to average 42 mpg. (This is an EPA testing average, which is roughly 25% higher than the window sticker on new vehicles.)

This July, the Obama Administration also plans to finalize the first-ever national fuel economy and greenhouse gas emission standards for commercial trucks, vans and buses built in 2014 to 2018.  These standards are expected to save hundreds of millions of barrels of oil over the life of these vehicles and promote the development and deployment of alternative fuels, including natural gas.  (See Comments Closing Today on Proposed Bus and Truck Fuel Economy Standards. 500 million barrels of oil at stake?)

The Administration is also developing the next generation of joint fuel economy/greenhouse gas emission standards for model year 2017-2025 passenger vehicles and expects to announce the proposal in September 2011.