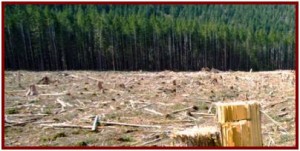 The politics of ethanol, virtually all of it corn derived, are as tangled as it gets. Taxpayers would be better off if legislators were required to wear NASCAR-style uniforms with the patches of the organizations that are their major contributors.

The U.S. Environmental Protection Agency (EPA) has issued fuel pump labeling and other requirements for gasoline blends containing more than 10% and up to 15% ethanol, known as E15. These requirements will help ensure that E15 is properly labeled and used once it enters the market.

However, EPA does not mandate the use of E15, nor has the agency registered the fuel, which is required before E15 can be legally sold for use in conventional vehicles. There are lawsuits pending against E15 use.

The latest regulatory move comes as the ethanol subsidy at a cost of more than $6 billion in annual handouts is under increasing attack. Last week the U.S. Senate passed a Feinstein (D-CA) – Coburn (R-OK) amendment to a small business bill (Ethanol Subsidy and Tariff Repeal Act) to end the ethanol tax earmark and tariff by a margin of 73 to 27. 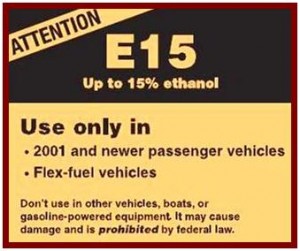 “The days of placing spending programs in the tax code and giving them holy status are over,” Dr. Coburn said.

“Economic conservatives and leading free-market groups like the Club for Growth understand that using the tax code to pick winners and losers kills economic growth and job creation.”

The ethanol tariff is comprised of a 54 cent Most Favored Nation duty and a 2.5% ad valorem tax. Critics say the ethanol tariff makes our nation more dependent on foreign oil by increasing the price of imported ethanol. Iowa State University estimates that a one-year extension of the ethanol subsidy and tariff would lead to only 427 additional direct domestic jobs at a cost of almost $6 billion, or roughly $14 million of taxpayer money per job.

The new orange and black label must appear on fuel pumps that dispense E15. EPA claims this label will help inform consumers about which vehicles can use E15. This label will also warn consumers against using E15 in vehicles older than model year 2001, motorcycles, watercraft, and gasoline-powered equipment such as lawnmowers and chainsaws.

The Association of Global Automakers – mostly offshore companies in AIAM, but not Chrysler, Ford or General Motors – was quick to protest saying it was disappointed with the final rule.

“While we are still reviewing the details of the final regulations, it is clear that the EPA program will not effectively prevent both intentional and unintentional misfueling,” the industry group said.

“EPA also failed to correctly address the need for a sufficient supply of E10 legacy fuel for vehicles and other engine products. Some consumers now will be left with no choice but to misfuel,” Global Automakers claimed.

During the past year, EPA issued two controversial partial waivers under the Clean Air Act that in sum allow E15 to be sold for use in model year 2001 and newer cars and light trucks.  EPA said it based its waiver decisions on testing and analysis showing that these vehicles could continue to meet emission standards if operated on E15.

Since automotive engine warranties run 10 years, automakers (or consumers if the warranty is denied or not transferable) could face expensive repairs if the critics are right about E15. There are also potential problems with the emissions controls, which would violate the clean Air Act, and potentially turn on millions of “Check Engine” lights.

How the oil refiners will respond is also unclear, but another grade of fuel is potentially needed, and/or expensive new gasoline pumps that blend varying amounts of ethanol at the point of sale will have to be developed and installed. Neither option appears immanent. Would gas stations eliminate E10 pumps, forcing misfueling for older cars and trucks?

The debate around ethanol involves the fact that it is indeed corrosive, potentially breaking down engine and fuel system seals. Ethanol is also harder to ignite, but burns at higher temperatures, potentially damaging engine and exhaust system components, including air-cleaning catalytic converters. It is also not as fuel efficient as gasoline.

The politics of ethanol, virtually all of it corn derived and therefore benefiting farm lobby interests, are as tangled as it gets, and taxpayers would be better off  if legislators were required to wear NASCAR-style uniforms with the patches of the organizations that are their major, err,  sponsors, to put it politely in pay to play Washington.

The 45-cent a gallon taxpayer subsidy that blenders get, as well as a tariff that effectively blocks competition from much more efficient Brazilian sugar-cane derived ethanol are part of huge, multi-billion dollar sops to the agricultural lobby, according to critics, or a badly needed job creation and energy independence program, according to supporters.