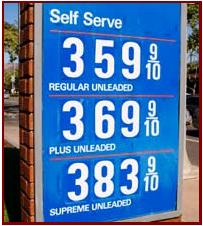 The 16-billion gallon cellulosic target appears laughable – EPA projected last year that less than 18 million gallons of the fuel will be available in 2011 - actually it was about 13 million gallons.

The U.S. Environmental Protection Agency – EPA – today finalized the 2012 percentage standards for four fuel categories that are part of the agency’s Renewable Fuel Standard program, known as RFS2. The standards were due at the end of November by statute, but EPA gave no public reason for the delay. The percentage standards represent the ratio of renewable fuel volume to non-renewable gasoline and diesel volume.

In 2012 about 9% of all fuel used will be from renewable sources. When President Bush and the Republicans passed the controversial Energy Independence and Security Act of 2007, the stated goal was to get to 20% of all fuel used by 2022 to come from U.S. made renewable fuels to free the U.S. from the ongoing  national security issues caused by importing foreign oil from totalitarian and terrorist supporting nations.

This worthy goal was going to be helped in the original bill by the elimination of  billions of dollars in taxpayer subsidies going to big oil, but not surprisingly in pay-to-play Washington, the subsidies remained when the final bill emerged from a closed conference committee meeting reconciling House and Senate versions. It also wasn’t a surprise that subsidies were also given to produce the ethanol that was required in the bill.

Currently U.S. taxpayers are handing agribusiness a subsidy of almost $7 billion annually to use corn to make ethanol, that’s more than $40 billion in pork – err corn – since the act’s passage, but now the ethanol subsidies expire in January – not a moment too soon according to critics. This 45-cent a gallon taxpayer subsidy that U.S. ethanol blenders now get, as well as a 54 cent/gallon tariff that effectively blocks competition from much more efficient Brazilian sugar-cane derived ethanol are both gone, at least for the moment. (But using Brazilian ethanol does nothing to help U.S. energy independence, of course.) It remains to be seen how ethanol – specifically E85 – now fairs at the pump as its price rises. As for E10 and E15 blends, drivers will have no choice, it will be forced on  them by the law.

The final 2012 overall volumes and standards are:

Last spring EPA had proposed a volume requirement of 1.28 billion gallons for biomass-based diesel for 2013, but has since backed down. EISA specifies a one billion gallon minimum volume for that category for 2013 and beyond. EPA said in a statement that it is continuing to evaluate many comments from stakeholders on this proposed biomass based diesel volume and will take final action next year.

The new cellulosic target is, perhaps, more troubling – more than the 500 million gallons are called for in the Energy Independence and Security Act this year, but EPA has the ability to adjust that based on the market. So it will be 8.65 million gallons. The best cost estimates of cellulosic biofuel are not economical compared with fossil fuels when crude oil’s price is $111 per barrel, according to the National Academy of Sciences – NAS.

The EPA – not for the first or the last time – is caught in the middle of the ongoing political bickering about the budget deficit and taxes, along with the pernicious effects of big-money lobbying from oil companies, agribusiness, refiners and national governments.

Virtually every gallon of gasoline sold in the U.S. right now contains ethanol: 98% as E10 – up to 10% ethanol for conventional autos, and 2% as E85 – 85% ethanol/15% gasoline for use in flex fuel vehicles only. The problem is we are not even currently close to achieving mandated usage goals; some projections show that next year the ethanol market (E10) reaches saturation at approximately 12.5 – 14 billion gallons of ethanol annually, which isn’t enough under EISA.

The EPA proposed in January to raise the amount of ethanol in fuel by 50% – from E10 to E15 but how this moves ahead is uncertain. (See EPA Grants E15 Fuel Waiver for Some Older Vehicles and Oil Refiners Sue Environmental Protection Agency to Stop E15 Ethanol Fuel Sales. Attack on EPA Broadens. )

The technical debate around ethanol use involves the fact that it is indeed corrosive, potentially breaking down engine and fuel system seals. Ethanol is also harder to ignite, but once an engine is running it burns at higher temperatures, potentially damaging engine and exhaust system components, including air-cleaning catalytic converters. It is also not as fuel efficient as gasoline because of its lower energy density. Worse, studies show that corn-derived ethanol takes as much energy to produce as is in the end result.

Given decades of failed policies by both the Democratic and Republican parties going back to President Nixon designed to get the U.S. off of imported oil, it’s tough to be optimistic that something will actually get done by partisans in our bickering national government. (See President Obama outlines Energy Independence Plan, Touting Alternative Fuels, “Safe” Nuclear Power, 33% cut in Oil Imports) Politicians are concerned with winning the next election and spending most of their time securing the funds necessary to finance what will no doubt be the most expensive election in history.