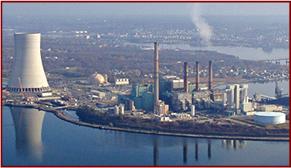 Brayton Point,  one of New England’s largest fossil-fueled generating facilities, consists of four generating units that produce enough electricity to power about 1.5 million homes. The new EPA regulation will clean up the air.

The U.S. Environmental Protection Agency has released the so-called Clean Power Plan, which for the first time cuts carbon pollution from existing powerplants, the single largest source of carbon pollution in the United States. In a statement, EPA said that this would protect public health, move the United States toward a cleaner environment and fight climate change while supplying Americans with reliable and affordable power.

As always the anti-environment wing of the Republican Party and the US Chamber of Commerce vowed to fight the regulation – ordered by President Obama – in the courts. This proposal follows steps laid out in President Obama’s Climate Action Plan and the June 2013 Presidential Memorandum.

While there are limits in place for the level of arsenic, mercury, sulfur dioxide, nitrogen oxides, and particle pollution that power plants can emit, there are currently no national limits on carbon pollution levels.

EPA’s proposed standard is required by a 2007 Supreme Court ruling ordering the agency to move forward with regulation of greenhouse gases.

Under the Clean Power Plan, EPA is proposing guidelines that build on trends already underway in states and the power sector to cut carbon pollution from existing powerplants, making them more efficient and less polluting.

As of right now, 47 states have utilities that run demand-side energy efficiency programs, 38 have renewable portfolio standards or goals, and 10 have market-based greenhouse gas emissions programs. Together, EPA clams that these programs represent a “proven, common-sense approach to cutting carbon pollution—one in which electricity is generated and used as efficiently as possible and which promotes a greater reliance on lower-carbon power sources.”

Ken Zino is an auto industry veteran with global experience in print, broadcast and electronic media. He has auto testing, marketing, public relations and communications expertise garnered while working in Asia, Europe and the U.S.
View all posts by Ken Zino →
This entry was posted in auto news and tagged autoinformed, autoinformed.com, co2, Ken Zino, powerplants. Bookmark the permalink.