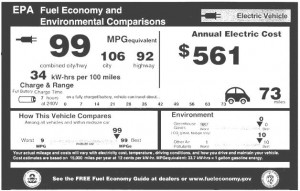 A great rating from the U.S. Government, but your mileage may vary.

The U.S. Environmental Protection Agency (EPA) has approved the fuel-economy label of the Nissan Leaf electric vehicle, claiming that the five-passenger car is best-in-class with a miles per gallon equivalent (MPGe) of 106 city, 92 highway or a combined 99 MPGe.

The annual electric cost using 12 cents a kilowatt-hour for the label is $561, a number far below those of the most fuel efficient gasoline powered cars or hybrids.

This calculation is based on the EPA’s formula of 33.7 kW-hrs being equivalent to one gallon of gasoline energy, and does not take into account how the electricity is generated. In addition, the label displays a charging time of seven hours using a 240-volt charger that can cost as much as $4,000 to buy and install in a home, and a driving range of 73 miles, based on five cycle tests that employ varying conditions and climate control settings.

Your mileage may almost certainly vary.

And because of ongoing consumer complaints about the inaccuracy of current window stickers, the EPA is yet again studying how to adjust the numbers.

This upcoming reformation of the window sticker is important, not only for buyers, but for auto and policy makers since government actions can convey significant marketing advantages or disadvantages to companies, and worse from a government imposed design standard point of view,  technologies.

I remember, ruefully, California’s failed EV mandate late in the last century. So the lobbying in Washington around this new system is intense.

The 2011 Nissan LEAF was also rated best-in-class for the environment based on emitting zero greenhouse gases or other traditional tailpipe emissions. (Again it doesn’t take into account how the electricity is generated.) The label will be part of the Leaf’s Monroney sticker when it goes on sale in December in California, Oregon, Washington, Arizona and Tennessee. In January 2011, sales begin in Texas and Hawaii, with additional markets added later in 2011.

“The label provides consumers with a tool to compare alternative-fuel vehicles to those with a traditional internal combustion engine and allows them to make an informed purchase decision,” said Scott Becker, senior vice president, Finance and Administration, Nissan Americas.

There are also other potential subsidies for the small car – 175 inches in length. There is $5,000 statewide tax rebate in California; a $5,000 tax credit in Georgia; a $1,500 tax credit in Oregon; and carpool-lane access in some states, including California. The charging dock and installation are eligible for a 50% federal tax credit up to $2,000.

Leaf is powered by laminated lithium-ion batteries, which generate power output of more than 90 kW and 24 kW hours of capacity – roughly $24,000 worth of batteries at current prices. Its electric motor delivers 80 kW/280 Nm.

Nissan hopes this pricing will make EVs more than the limited volume technical curiosities theory are today. However, the small car faces stiff competition from larger and technically advanced hybrid vehicles, as well as simpler economy cars in the $10,000 to $17,000 range, including Nissan’s own Versa and Sentra models.