Posted on 8 October 2014 by Kenneth Zino 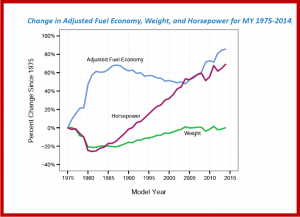 New vehicles achieved record fuel economy in 2013, the Environmental Protection Agency announced today. Model year 2013 vehicles achieved an average of 24.1 miles per gallon, a 0.5 mpg increase compared with  previous year of 2012 and an increase of nearly 5 mpg since 2004. However, year-over-year it was only a 2% improvement. Nonetheless, fuel economy has now increased in eight of the last nine years. The average carbon dioxide emissions are also at a record low of 369 grams per mile in model year 2013.

The question is whether these trends, specifically the rate of increase and decrease – CO2 needs to go a whole lot lower – can continue. Truck buyers are now returning the market in great numbers.  And in-spite of technological improvements this is worrisome from an emissions and fuel economy point of views.

President Obama told the EPA and the Department of Transportation several years to put in place standards projected to double fuel economy by 2025 (54.5 mpg, but this translates to 40 mpg on the EPA sticker because of two different measurements.) and cut vehicle greenhouse gas emissions by half. This goal, proposed in 2012, still looks to be ambitious. It requires big improvements in the deployment of new technologies when there is a big model change, along with improvements in conventional technologies along the way.

Two 20-year old engine technologies – variable valve timing (VVT) and multi-valve engines – are both projected to be used on nearly all MY 2014 vehicles. Gasoline direct injection (GDI) engines have increased market share nearly ten-fold from 4% in MY 2009 to 38% in MY 2014. Turbochargers, which are often used in conjunction with GDI, have increased market share by a factor of five since MY 2009.

The 2025 goal also makes an assumption the electric vehicles will comprise 10% of sales. Year-to-date sales of EVs are 0.7% of the SAAR and hybrids are 2.9%, according to CowenResearch.

The EPA estimates these standards will save American families more than $8,000 in fuel costs per vehicle by 2025. Throughout the duration of the program, Americans will save $1.7 trillion in fuel costs, use 12 billion fewer barrels of oil, and in 2025, reduce oil consumption by more than 2 million barrels a day – as much as half of the oil imported from OPEC every day.

The 2013 fuel economy improvement is attributed to automakers’ rapid adoption of more efficient technologies such as gasoline direct injection engines, turbochargers, and advanced transmissions, which was forced by regulations (some of them are now virtually global) that previously had stagnated for decades. We have yet to see the impact of start-stop technologies or of the increasing use of aluminum in high volume vehicles with the 2015 Ford F-Series – long the best-selling vehicle in the U.S. leading the way.

Some of the clear winners in the report are:

Of the five vehicle types, cars have the highest average adjusted fuel economy of 28.3 mpg, followed by car SUVs at 24.5 mpg. Car SUVs (SUVs that must meet car GHG and fuel economy standards) and truck SUVs had the highest annual improvement from MY 2012 to MY 2013 of 1.1 and 0.9 mpg, respectively. Based on longer-term trends since MY 2004, truck SUVs have the largest cumulative percentage fuel economy improvement of 27% from low base) followed by both cars and car SUVs at 23%, which is good.

“We are thrilled to see that manufacturers continue to innovate and are bringing technologies to improve fuel economy online even faster than anticipated,” said EPA Administrator Gina McCarthy. “Consumers now have many more choices when shopping for vehicles with higher fuel economy and lower emissions compared to just five years ago.”

Ken Zino is an auto industry veteran with global experience in print, broadcast and electronic media. He has auto testing, marketing, public relations and communications expertise garnered while working in Asia, Europe and the U.S.
View all posts by Kenneth Zino →
This entry was posted in fuel economy or emissions, milestones and tagged autoinformed, autoinformed.com, cafe, epa, Ken Zino. Bookmark the permalink.