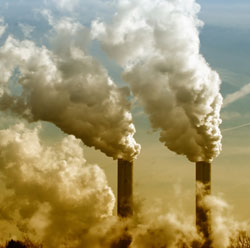 EPA is going after the big GHG emitters – refineries and power plants.

The U.S. Environmental Protection Agency today issued a plan for establishing greenhouse gas (GHG) pollution standards for refineries and power plants, in what appear to be victories for small businesses, farms and environmental moderates.

It also signals the Obama Administration’s desire to move forward next year on global warming in the face of fierce Republican party opposition.

Several states, local governments and environmental organizations sued EPA over the agency’s failure to update the pollution standards for fossil fuel power plants and petroleum refineries, two of the largest source categories of GHG pollution in the United States. The lawsuits claimed EPA was not doing its job under the 40-year-old Clean Air Act and it needed to move forward with sweeping regulations.

The $10 billion Federal agency under an impending consent decree will start next year on GHG standards for fossil fuel power plants and petroleum refineries—two of the largest stationary sources of GHG, representing nearly 40% of the GHG pollution in the United States.

The standards or new rules were not announced, and they are expected to be fiercely contested by oil and power companies as they evolve. In theory, coal power plants could be shut down and critics say that the U.S. could loose jobs and power generation as a result.

“In general the agency does not mandate any particular technologies,” said Gina McCarthy, EPA Assistant Administrator for Air and Radiation. “This set in place a process that will help decrease greenhouse gases,” she said during a press call.

McCarthy also said that the new policy will create jobs, while giving state agencies flexibility in setting standards since they will differ according to timelines, age of the facilities and affordable technologies.

The move follows EPA’s earlier determination that greenhouse gases are an endangerment to public health. The automobile industry was targeted first for GHG reductions as part of new fuel economy regulations. EPA is now going after two other large sectors. Eventually the agency will look at other sources of GHG emissions.

In 2008, about 84% of the energy consumed in the United States (on a Btu basis) was produced through the combustion of fossil fuels.

Republicans are adamant that the party will continue to oppose greenhouse gas regulations, which will make for heated debates in the new U.S. Congress when it convenes in January.

Electricity generators consumed 37% of U.S. energy from fossil fuels and emitted 42% of the CO2 from fossil fuel combustion in 2008. The type of fuel combusted by electricity generators has a significant effect on their emissions. Some electricity is generated with low CO2 emitting energy technologies, particularly non- fossil options such as nuclear, hydroelectric, or geothermal energy.

However, electricity generators rely on coal for over half of their total energy requirements and accounted for 95% percent of all coal consumed for energy in the United States in 2008.

The schedule issued in today’s agreements is part of what EPA says is a “common-sense approach” to addressing GHGs from the largest industrial pollution sources.

The standard setting process established under the Clean Air Act has been used 75 times and is not a mechanism for establishing a “cap and trade” system McCarthy stressed.

The Act it is claimed by EPA “allows flexible and innovative approaches that take into account cost, health and environmental impacts, and energy requirements.”

EPA must also periodically update these standards to reflect improvements in control technologies.

Beginning in January 2011, industries that are large emitters of GHGs, and are planning to build new facilities or make major modifications to existing ones, must obtain air permits and implement energy efficiency measures or, where available, cost-effective technology to reduce their GHGs emissions.

This includes the nation’s largest GHG emitters, such as power plants, refineries and cement production facilities. Emissions from small sources, such as farms and restaurants are not covered by these GHG permitting requirements.

1 Response to EPA Moves Ahead on Greenhouse Gas Standards