Nico Hulkenberg is without a ride for 2020.

The Renault F1 Team finally admits that  Esteban Ocon will join Daniel Ricciardo as a works driver next year during its fifth season in F1. Twenty-two-year-old Esteban, from Normandy, France, will join the under-performing Renault F1 Team on a two-year contract. The Frenchman is known to Renault, having been Renault reserve driver in 2016 and also a Lotus junior program member. Ricciardo is currently 11th in the standings. Nico Hulkenberg is 14th, and since his contract is expiring, rumors are rampant about next season.

Esteban has a mixed record but an advantage in that he’s French. He made his F1 race debut mid-2016 with Manor Racing, before moving to Sahara Force India F1 Team in 2017. Aged just 19 years and 345 days, he was the youngest French driver to ever start an F1 race – a record he holds to this day. 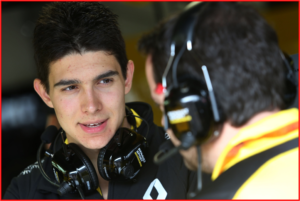 A challenging assignment for a young would-be superstar.

In his first full season in the sport, he tallied 87 points and eighth in the drivers’ championship. In 2018, Esteban added a further 49 points to his F1 tally before joining Mercedes AMG Petronas F1 Team as reserve driver for the 2019 season.

In two and a half seasons, Esteban Ocon has 50 F1 Grand Prix starts, finishing in the points in 28 races and retiring on 6 occasions. His performances include qualifying 3rd in Belgium in 2018, finishing 5th in Mexico in 2017, and 8th in the 2017 World Championships.

Renault says that signing to the F1 Team is the next step in Evreux-born Ocon’s career. After his early success in karting, he swept the Lotus F1 Junior Team (forerunner of the Renault Sport Academy) to the podium right from his first season racing single-seaters. Finishing third in the Eurocup Formula Renault 2.0 in 2013, Ocon went on to win the FIA European Formula 3 Championships in 2014 and the GP3 Series in 2015.