EU Car Sales Continue to Evaporate in October – Off -5% 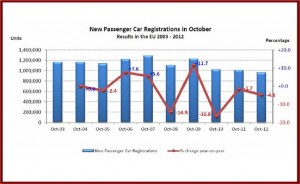 The economic decline of the European Union continued in October as sales of new passenger cars contracted by 5% to 959,412 compared to October of 2011. It was the thirteenth straight month of sales declines across an economically embattled Eurozone as the trade bloc made of 27 bickering nations is unable to move out of the economic doldrums.

With sales in the first ten months of 2012 down to 10,327,276 units, or -7.3%, the EU is on pace for its fifth straight year of sales declines as the Great Recession that started in 2008 deepens its hold in the face of ineffective economic policies. The sales drop is the equivalent of four final assembly plants of lost wealth production, and that doesn’t count negative effects on the numerous components plants that support that production. Stockholders at all of the Detroit Three automakers are being hurt, and that is if you consider Fiat-controlled Chrysler as part of the Motown trio any longer. 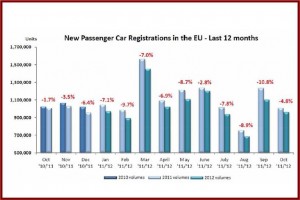 No end in sight for losses at the so-called Detroit Three.

The challenges for the Detroit Three multiply and compound as sales continue to decline.

Volkswagen continues to expand its share. The chart is for individual brands only not group sales, where VW Group is approaching 25% of the market.

GM claims Europe will achieve breakeven by mid-decade after having lost billions there during the last one. “We are starting to see some green shoots in the mud of Opel,” claimed Steve Girsky, vice chairman of GM during a Q3 earnings call with media. (His eyesight or imagination must be better than mine.) In a major step – at least for GM – Girsky said that Opel is no longer building vehicles without dealer orders. Company and dealer-owned inventories were cut by more than 100,000 units from February, with an additional 20,000 planned by year-end. This adds to a 47% reduction in company-owned stock, it was claimed. Girsky also said Opel would introduce 23 new models and 13 new engines by 2016 as it continues to seek union agreements on plant closings.

Ford in late October announced a series of actions to restore its European operations to profitability by mid-decade, targeting a long-term operating margin for Ford Europe of 6% to 8%, which would be an almost unbelievable turnaround after decades of losses and failed recovery plans. (Ford to Shut Genk as part of latest European Turnaround Plan and Ford Motor Posts $1.6 Billion Profit in Q3. Europe Loses $468 Million)

CEO Sergio Marchionne said three weeks ago that to recover in Europe the Group would fill the existing five plants in Italy with upscale Alfa Romeo, Maserati and Jeep models by 2016 rather than closing some of them. Roughly 15% of Fiat’s capacity would be used for exports. “We have to stop chasing our own tail in Europe,” Marchionne said during a conference call with surprised to frankly skeptical analysts and media. “This plan is not for the faint hearted,” he admitted. Without Chrysler earnings, Fiat Group would have lost -€281 million in the third quarter of 2012.