EU Car Sales Down 8.7% in May. Eight Straight Months of Drops 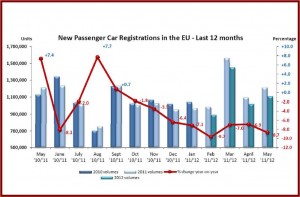 New passenger car sales in the EU declined 8.7% in May to 1,106,845. It was the eighth consecutive month of sales declines, according to ACEA, the automakers association. Five months into the year, new registrations amounted to 5,442,326 units or 7.7% less than in the same period last year as the EU is headed for its fifth straight year of car sales declines with unemployment at depression levels.

“It is first and foremost the responsibility of the automobile manufacturers to ensure their competitiveness, and all of us pursue that goal head-on,” said Sergio Marchionne, as the heads of the European automobile industry held meetings with Spanish government officials in Madrid today. Spain is the second largest automotive producing country in Europe.

“But some issues are beyond our reach. What we ask from governments is to facilitate growth, and ensure that the game is fair. It is our collective responsibility to make sure that Europe prospers for a long time to come,” said Marchionne.

Thus far the European auto industry has done little to reduce its capacity, which is now out of sync with constantly falling demand. GM is planning on closing its Opel Zafira plant in Bochum, Germany after the run-out of the current Zafira in 2015, but that is not enough to return Opel to profitability after decades and hundreds of billions in losses. Opel employs 20,800 people across Germany and more than 40,000 across Europe.