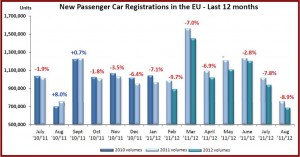 Among the largest automakers, only Volkswagen Group with flat sales appears to be unscathed thus far from five straight years of total sales declines in the EU.

The crisis in the Eurozone continues unabated as new car sales dropped 9% in August year-over-year after declining by 7.8% in July. As a result, in the 27 countries that comprise the EU, sales dropped to 688,000 vehicles. Year-to-date sales are down to 8.3 million units, the lowest in decades and heading toward the fifth straight year of overall sales decreases.

Particularly troublesome was Germany, traditionally the economic and car sales leader of Europe.  Germany is now also heading toward a recession. In August, Germany saw demand contract by -4.7%, while France (-11.4%) and Italy (-20.2%) continued to incur double-digit downturns as their economies remain at depression levels of unemployment. The Spanish market (+3.4%) expanded slightly but that meant an increase of only 1,600 units to 49,000. The United Kingdom at 59,000 remained stable.

The challenges for the Detroit Three continue to increase as sales continue a downward trend. GM Group, largely dependent on loss making Opel/Vauxhall saw year-to-date sales drop to 686,000 units or -12%. That is almost 100,000 vehicles or half a production plant in Europe, which already has far too many. (Only Volkswagen Group with flat sales appears to be unscathed thus far. VW is Number One ytd at more than 2,000,000 vehicles – more than twice that of Number Two PSA Group, which is also attempting to close plants.)

GM is planning to close its Opel Zafira plant in Bochum, Germany after the run-out of the current Zafira in 2015, but that is not enough to return Opel to profitability after decades of losses totaling hundreds of billions dollars. (GM Q2 Profits Drop to $1.5 Billion From $2.5 Billion as Its European Losses Grow. Revenue and Cash on Hand also Decreased.) Opel employs 20,800 people across Germany and more than 40,000 across Europe. The head of GM Europe was ousted in July over the continuing losses and the lack of progress.

Ford Motor saw ytd sales decline to 625,000 (-12%), also a half of a final assembly plant. Ford will now lose at least $1 billion in Europe this year, but has offered no specifics on how it will stem what are also decades of losses. (Ford Motor Q2 Profit Plummets $1.4 Billion as Europe, South American and Asia Continue to Hurt Earnings and Shareholders) At a meeting with dealers and employees in Amsterdam earlier in September, senior executives outlined the latest European turnaround plan that hinges on new products, with large car, SUV and commercial vehicle segments cited as areas where growth could be profitably attained. All told, fifteen global vehicles will be on sale in Europe within five years, but the bulk of recovery plan depends on traditional European fare such as the Fiesta, Kuga, Mondeo and Transit, previously touted as European comeback models under earlier turnaround plans that did not work.

“August was even slower than usual this year, and there was a lot of short-cycle business and heavy incentives that we decided to largely refrain from,” said Roelant de Waard, vice president, Marketing, Sales and Service, Ford of Europe.

Fiat Group, the owner of Chrysler, had sales drop -17% to 543,000 – once again half an assembly plant, not counting the continuing negative effect on components plants. For the first 8 months of 2012, Fiat Group registered a 6.6% marketshare, primarily reflecting the negative trend in Italy, where the auto market has fallen to levels last seen in the 1970s. In August, Fiat’s share plummeted to only 5%. In Q2 Fiat lost €246 million with the Chrysler contribution backed out of the results. (Chrysler Group Q2 2012 Profit Totals $755 million) The irony of once bankrupt – but increasingly healthy  – Chrysler now bailing out Fiat is noted here. Among the bigger problems Chrysler now faces is the sickly state of its Italian parent company, and what effect it will have on future product plans.