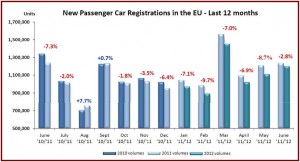 Thus far the European auto industry has done little to reduce its capacity, which is now widely discordant with years of constantly falling demand.

In June passenger car sales in the EU declined by 2.8%, continuing the downward trend that began in October last year and setting the stage for the fifth straight year of auto sales declines in the troubled Eurozone. It was the worst June in ten years.

In total, 1,201,578 new cars were registered in the region in June. During the first half of the year demand for new cars was down 6.8%, compared to the first half of 2011, amounting to 6,644,829 units, according to ACEA, the European automakers trade group. This is far below the sales of more than 15.5 million units in 2007 before the reckless practices of Wall Street collapsed the global economy.

Commercial vehicles sales are also suffering. In May, new commercial vehicle registrations continued the downward trend that in January, facing the sharpest decrease since 2009 at -17.8%, compared to May 2011.

Capacity needs to be reduced now to meet falling demand, but union contracts run through 2014.

Thus far the European auto industry has done little to reduce its capacity, which is now widely discordant with constantly falling demand. GM is planning to close its Opel Zafira plant in Bochum, Germany after the run-out of the current Zafira in 2015, but that is not enough to return Opel to profitability after decades of losses totaling hundreds of billions dollars. Opel employs 20,800 people across Germany and more than 40,000 across Europe. The head of GM Europe was ousted earlier this month over the continuing losses and the lack of progress.

PSA Peugeot Citroën will close the Citroën C3Aulnay plant in 2014, and trim production at Rennes, which makes the Peugeot 508, Citroën C5 and C6. More than 4,400 jobs are affected. Since mid-2011, the Group has been consuming about €200 million in cash a month, and it is not clear it will survive if the sales slump continues.