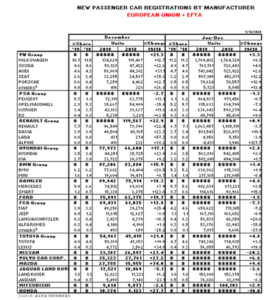 In December 2019, EU passenger car demand grew for the fourth month in a row (+21.7%), marking the highest December total on record to date. However, most of this was a statistical anomaly not caused by real growth. This was largely the result of a low base of comparison, as registrations fell by 8.4% in December 2018.

There were significant market interventions in France (+27.7%) and Sweden (+109.3%), as both countries announced large changes to the “bonus-malus” (negative incentives for poor performance) component of CO2-based taxation for 2020. The Netherlands (+113.9%) decided to increase taxation of electric company cars from 4% to 8% from January 2020. As a result, all EU countries – including the five big markets – posted solid growth rates in December.

However, for the entire year of 2019 growth was a paltry +1.2% across the European Union, reaching more than 15.3 million units in total and marking the sixth consecutive year of growth. The year started weak due to the lasting impact of the introduction of the WLTP test in September 2018, which showed that there was significant cheating on emissions compliance by automakers, and diesels in particular were dirtier than disclosed. The final quarter of 2019, and December in particular, pushed the full-year performance of the EU market into slightly positive territory.

Ken Zino is an auto industry veteran with global experience in print, broadcast and electronic media. He has auto testing, marketing, public relations and communications expertise garnered while working in Asia, Europe and the U.S.
View all posts by Kenneth Zino →
This entry was posted in sales and tagged acea, auto industry commentary, autoinformed.com, Kenneth Zino. Bookmark the permalink.