European Auto Sales down in 2011 for Fourth Straight Year 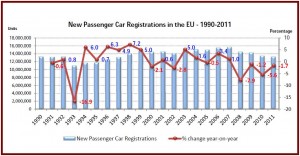 "The year 2012 will be challenging especially if the instability in the Eurozone would not be addressed,” said Fiat's Sergio Marchionne.

New passenger car sales in the European Union – EU – declined by 6.4% to 953,108 units in December of 2011, ACEA, the automakers trade group said this morning in Brussels. During the year of 2011, demand for new cars was decreased by 1.7%, bringing the total number of units registered at 13,111,209. This means that in the troubled Eurozone full year sales declined for the fourth consecutive time.

The ongoing European slump along with calls to contract spending has ominous implications for General Motors, Ford Motor and Chrysler Group. All are struggling with their respective European arms, as the mostly jobless U.S. recovery remains tentative and fragile to external shocks such as the collapse of the euro, natural disasters or another oil crisis in the middle east.

For the year American automakers General Motors finished fourth with a flat 8.7% share. Fifth place Ford Motor (8%, a slight decline) made no sales progress either, even though both companies have introduced a series of new models. Sixth place Fiat – the owner of Chrysler courtesy of American taxpayers – continues to struggle along with Italy, off almost a full percentage point in share to 7.1%. One bright spot – Jeep sales are up 63% from an admittedly small base to more than 22,000 units.

Counter intuitively the Eurozone crisis is producing calls for austerity, instead stimulus plans that would increase tax revenues and employment from all industries, including auto manufacturing and sales. The automobile industry in Europe provides employment for more than 2.3 million workers and supports another 10 million jobs in related industries. Annually, automakers invest more than €30 billion in R&D, which makes it the largest private investor in R&D in Europe. Europe’s increasing instability poses risks for European, as well as the global economy. It could even affect the outcome of the U.S. presidential election this year.

Not surprisingly, Volkswagen, remains Europe’s largest automaker, and  continued to outperform the market. VW Group has increased market share by 2% ytd to 23%, led by Volkswagen, which has sold 1,622045 vehicles (+9%) in 2011 and holds a commanding share of better than 12%. French automakers PSA Group and Renault are second and third with 11.5% share and 9.7% respectively YTD.

Also of note, 2012 marks the entrance of Hyundai into ACEA membership (3% 2011 share at 382,255 vehicles), even though automakers remains opposed to the terms of the Korean FTA, which went into effect last July. Automobiles are now the largest export product of the South Korean economy. Its car industry with a production of 3 million cars per year, of which 2 million (64%) are exported – 300,000 of which were sent to the EU in 2010.

Sergio Marchionne, Chief Executive Officer of Fiat S.p.A. as well as Chairman and CEO of Fiat Group Automobiles S.p.A., is ACEA’s President for 2012. Marchionne takes over from Dieter Zetsche, Chairman of the Board of Daimler AG and Head of Mercedes-Benz Cars Division, who served as ACEA President in 2010 and 2011.

“The year 2012 will be challenging especially if the instability in the Eurozone would not be addressed,” said Marchionne. “Our association will further focus its work on three main issues: European industrial policy; sustainable mobility and transport; and international trade relations. These issues are all closely linked as the industry’s capacity to invest and innovate depends on a strong, competitive manufacturing base in Europe.”