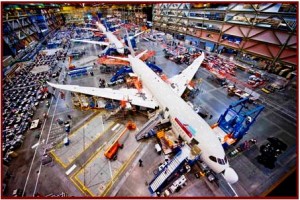 The FAA has finally grounded the Boeing 787 Dreamliner after yet another life threatening incident, the apparent failure and fire of a lithium ion battery-pack during the flight of a Nippon Air 787 in Japan. The reluctant safety regulator finally acted only days after the DOT head, Republican Ray La Hood, claimed that the 787 Dreamliner was safe to fly in the face of a growing number of troubling incidents that included the fire on the ground of a 787 at Logan Airport in Boston.

Before further flight, operators of U.S.-registered Boeing 787 aircraft must demonstrate to the Federal Aviation Administration that the batteries are safe, the FAA said in a statement. The so-called “airworthiness directive” is prompted by a second emergency involving a lithium ion battery. The battery failures resulted in release of flammable electrolytes, heat damage, and smoke on two Model 787 airplanes. The root cause of these failures is currently under investigation. “These conditions, if not corrected, could result in damage to critical systems and structures, and the potential for fire in the electrical compartment,” the FAA acknowledged. (See Simanaitis Says for a serious analysis of the issue.)

The 787 uses two lithium-ion battery packs made by GS Yuasa in Japan that are much larger than the lithium ion packs used by automakers in EVs and hybrids. These include the ones in the Chevrolet Volt that overheated and caught on fire after crash tests. The Boeing controversy is of interest to the auto industry since its use of lithium ion batteries in electrical vehicles and hybrids is growing at an exponential rate, with millions upon millions of battery packs soon to be on U.S. roads. in the computer industry Lenovo, IBM, Dell and Apple have all recalled laptops because of lithium-ion battery defects from Sony that can cause fire. (See NHTSA Closes Volt Battery Fire Investigation with No Recall and Hewlett-Packard Fined $425,000 for Not Reporting Defective Lithium Ion Batteries that Seriously Injured Consumers and Volt Fire Hearings Pits Ideologues versus Engineers)

The core analytical issue is that the 787 is all-new, all-new – as in a fully-electronic airplane that eliminates hydraulic systems, substituting electronic ones to increase fuel efficiency by about 20% for a medium size jetliner. The design challenge is similar to ones posed by the CAFE mandates for drastically increased that the auto industry faces. The electronic systems are complex in the Boeing aircraft, as they now are in automobiles where electronic recalls are growing safety and customer satisfaction problem. Moreover, no previous aircraft certification rules existed in the U.S. for an airplane that uses electronics as pervasively as the 787.

So the FAA and Boeing are learning as they go, and the education now appears to be expensive, with tuition in the guise of grounded multi-million dollar, non-revenue producing carbon-fiber sculptures the high price that airline stockholders are now paying. The supply chain might be another issue as well – too many suppliers, too far apart, and selected in part by politics from the countries that were buying the 787. Moreover, who knows what role carbon fiber plays in 787 failures with its different stress and vibration characteristics than those of aluminum, which Boeing is expert in.

Like the collapse of the U.S. financial markets in 2008, the result of what are now clearly regulatory failures, the aborted flight of an All Nippon Airways 787 yesterday after smoke appeared in the cockpit and the passenger compartment of a Dreamliner in Japan raises troubling questions about the regulatory effectiveness of the FAA, and its repeated assertions that the 787 is safe to fly.

The 787 uses two lithium-ion battery packs made by GS Yuasa in Japan, which thus far has no comment in keeping with the Japanese code of silence that was much in evidence during the Toyota unintended acceleration controversy. These battery packs are much larger than the lithium-ion packs used by automakers in EVs and hybrids, including the ones in the Chevrolet Volt that overheated and caught on fire after NHTSA crash tests. The controversy is therefore of more than passing interest to the auto industry since its use of lithium ion batteries in electric vehicles and hybrids is growing at exponential rate, with millions of lithium ion battery packs soon to be on U.S. roads. It is also a controversy that NHTSA  – the auto safety arm of the DOT – should be following, given its well documented problems in Toyota unintended acceleration deaths and other safety matters. .(See NHTSA Closes Volt Battery Fire Investigation with No Recall and Hewlett-Packard Fined $425,000 for Not Reporting Defective Lithium Ion Batteries that Seriously Injured Consumers and Volt Fire Hearings Pits Ideologues versus Engineers and DOT Releases Long Delayed Toyota Unintended Acceleration Report, Exonerates Self, Claiming It Was Right All Along)

The FAA’s so called “emergency airworthiness directive” issue last night only applies legally to United Airlines, the only U.S. operator of six 787s, and ironically the air carrier that resulted from the U.S. government-dictated breakup of Boeing into three companies during the Great Depression of the last century. The other 54 Dreamliners are also grounded indefinitely by regulators in the home countries of the airlines flying them – until today –  in Japan, Great Britain and India.

The grounding finally occurred after a series of overlooked mishaps on the Boeing 787 that included engine oil leaks, cracked windshields and the first fire last week, which prompted the FAA to promise a comprehensive review of the design, manufacture and assembly of the Dreamliner, but not its grounding.

The whole, sad scenario is now a nightmare – not the stuff of dreams – for Boeing and the FAA. The 787 designation itself was the date of an elaborate unveiling during July of 2007, with the first flights planned for that August. The twin-engine carbon-fiber aircraft had several production delays before finally entering service years later.

Last Monday, a Japan Airlines 787 at Boston Logan Airport caught fire, prompting an ongoing National Transportation Safety Board investigation. JAL said that smoke was detected while the 787 was on the ground after passengers disembarked during cleaning. It was traced to the lithium ion battery-pack used to start the auxiliary power unit. The next day, a JAL 787 returned to the gate at Logan after a fuel leak was spotted while it was taxing for takeoff.

A team of FAA and Boeing engineers and inspectors will conduct a “joint review,” with an emphasis on the aircraft’s electrical power and distribution system, according to the FAA. The review will also examine how the electrical and mechanical systems interact with each other.

In a statement last week Boeing said, “The airplane has logged 50,000 hours of flight and there are more than 150 flights occurring daily,” well, that was last week. “Its in-service performance is on par with the industry’s best-ever introduction into service – the Boeing 777. Like the 777, at 15 months of service, we are seeing the 787′s fleet wide dispatch reliability well above 90%,” claimed Boeing.

A failure rate of 10% of the small numbers of planes flying is a troubling figure to statisticians and engineers outside of Boeing, in spite of La Hood’s claim that the 787 is safe. This is not unlike claims from the Federal Reserve, Treasury Department and the SEC, among other failed regulators that “free markets” are self regulating. The Great Recession we are now enduring is the result of lax regulation of Wall Street, hedge funds, investment firms and commodity speculators.