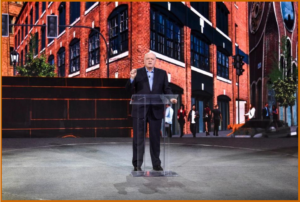 Ford Motor Q1 earnings before interest and taxes (EBIT) of 5.2% are down 1.2% from Q1 of 2017. It is currently trading at ~$11 with a 5% yield. This reinforces the widespread skepticism on Wall Street about its alleged streamlining, consolidation and cost cutting. The wisdom of abandoning the car business to compete in a nebulous “mobility company” in industry jargon is also in play. Ford Out of Car Biz? 2019 Fusion Debuts in New York; Ford Places $1B Bet in Argo AI on Autonomous Vehicles

No wonder existing shareholders are restless after record industry sales years in the U.S., a booming Chinese market that is now the world’s largest, and a recovery of sales in the EU. During this time of strong global markets that Ford Motor is well established in, Ford revenue in Q1 of $42 billion was up $2.9 billion year-over-year – but meager returns continue. Ford Proxy – Shareholders Want Political Spending Info

Stockholders and Wall Street are skeptical of Ford investor relations “happy talk.” Ford now claims that the company can slash an additional $11.5 billion via cost and efficiency programs in what looks to be a difficult slog to the promised, but still weak 8% EBIT by 2020.

This 8% automotive operating margin is normally obtained or surpassed by offshore automakers year in, year out. It gets worse when you consider Ford Motor costs have grown as fast as revenue; Grimmer still when capital spending has grown even faster. Some think the company can’t survive the next downturn – if it’s bad enough, or deep, deep pocket Google’s entry into the mobility business this year.

Ford Motor is investing $1 billion during the next five years in Argo AI, a startup company with robotics experience and artificial intelligence software, in a claimed attempt to advance its autonomous vehicles programs. Founded by former Google and Uber leaders, Argo AI will include roboticists and engineers from inside and outside of Ford working to develop a new software platform for Ford’s fully autonomous vehicle coming in 2021. Ford Forms Smart Mobility Subsidiary

The Fusion introduced last month is a rolling contradiction to Ford’s announcement last fall that it is vacating the car business and relocating scarce capital to becoming that emerging and rampant auto cliché – a mobility provider.

Is this true? Well only partially, one hopes. Surely variations of the platform – as crossovers, station wagons or whatever can be recycled – and not just in Mexico where Fusion is assembled – are planned. The product planning is without doubt challenging given a backdrop of President Trump’s (himself a limited edition or short-cycled product one hopes) incoherent nit-twits on trade, tariffs and regional agreements. “Cars” remain a threatened species at Ford though, as noted.

Talking up the stock hasn’t worked. (General Motors has similar problems on Wall Street with criticism of its management and returns.) Executive turnover doesn’t help Ford either. The next opportunity to see if Ford has a pulse is to look at April and year-to-date sales in the U.S. this week. Ford Motor Shakes Up Senior Management During Sexual Harassment Debacle; Me Too? Raj Nair, President North America, Fired by Ford