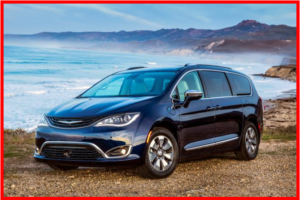 FCA today debuted the new 2017 Chrysler Pacifica Hybrid, a thus far unique offering in the segment. Pacifica Hybrid’s is rated at an estimated 30 miles of all-electric range, 530 miles of total range and 80 miles per gallon equivalent (MPGe) in city driving.

Cargo space remains unchanged since the 16-kWh battery pack is stored in the second-row floor. The hybrid also for a full $7,500 federal tax credit and may qualify for additional state and local taxpayer subsidies.

“No other vehicle in the marketplace can move people or cargo like the 2017 Chrysler Pacifica, and adding electrification technology to that equation means even more efficiency for customers,” said Tim Kuniskis, Head of Passenger Car Brands, Dodge, SRT, Chrysler and Fiat, FCA – North America. “By storing the battery pack under the second-row floor, customers aren’t losing any passenger or cargo volume, so there’s no trade-off or compromise when choosing the Pacifica Hybrid. Most importantly, the driving experience for customers remains unchanged – the vehicle operates in electric mode whenever possible and seamlessly transitions to hybrid mode when needed.”

As the original creator of the minivan more than 30 years ago, FCA has a series of firsts, with a claimed 78 innovations through the first five minivan generations. With the introduction of the all-new Chrysler Pacifica and Pacifica Hybrid, FCA US adds 37 minivan firsts to its portfolio for an unprecedented total of 115 innovations in the segment, including the industry’s first minivan available as a plug-in hybrid electric vehicle.

The 2017 Chrysler Pacifica Hybrid, as stated, will deliver an estimated range of 30 miles solely on zero-emissions electric power from a 16-kWh lithium-ion (Li-ion) battery. In city driving, it is expected to achieve an efficiency rating of 80 miles per gallon equivalent (MPGe) based on U.S. Environmental Protection Agency standards.

When the battery’s energy is depleted, the Pacifica Hybrid becomes a part-time electric vehicle, like a conventional hybrid. Power to the wheels is supplied by the electric drive system or supplemented by a specially adapted 3.6-liter V6 engine. The battery may be fully recharged in as little as two hours using a 240-volt plug-in system.

“Minivan drivers travel an average of 30 miles each day, meaning that most Pacifica Hybrid owners will be able to complete their daily activities solely on electric power,” claimed Kuniskis. “For those longer weekend trips, the 30-mile all-electric range combined with a full tank of fuel will deliver an expected total range of 530 miles, alleviating the potential of any range anxiety.”

The key technology behind the Pacifica Hybrid is its eFlite electrically variable transmission (EVT). Designed by FCA US, the device has two electric motors – both of which can drive the vehicle’s wheels.

Conventional electrification schemes dedicate one motor to serve as a generator and a second motor – usually much larger – to deliver torque to the wheels. But the Pacifica Hybrid uses a one-way clutch that allows the motor typically used only as a generator to deliver torque to the wheels, depending on driving conditions. The result is increased efficiency, refinement and improved component packaging, claims Chrysler.

Taking advantage whenever the driver slows, the Pacifica Hybrid’s regenerative braking system converts kinetic energy to electricity, helping to provide additional range by charging the lithium-ion battery. As the Pacifica Hybrid decelerates from a higher speed, the high-voltage motor becomes a generator and charges the battery to extend the electric range.

The 2017 Chrysler Pacifica Hybrid was re-engineered an all-new platform, with claims of delivering class-leading ride and handling and reduced noise, vibration and harshness (NVH). Its body structure is the lightest and stiffest in its class, making it more responsive with lower levels of body roll and enhanced agility to absorb and distribute road inputs. Class-leading aerodynamics contribute to the Pacifica Hybrid’s estimated fuel economy of 80 MPGe in city driving.

Available for the first time on the all-new Pacifica is the Surround View camera, which uses four cameras positioned around the vehicle to provide 360-degree views, including a bird’s eye perspective of the vehicle and its surroundings.

The Chrysler Pacifica Hybrid offers a variety of exclusive features to make it easy for customers to take full advantage of the vehicle’s innovative hybrid powertrain system, including: