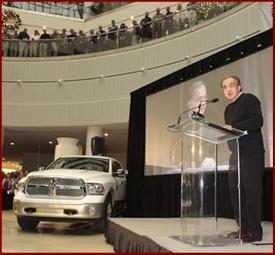 Chrysler Group, the twice taxpayer bailed-out Michigan-based automaker, today announced that it has changed its company name to FCA US LLC.

The name change to FCA US LLC does not affect the company’s headquarters location in Auburn Hills, Michigan, its holdings, management team, board or brands, but it is clear – as it has been for sometime – that Fiat has now swallowed Chrysler whole.

In a statement, FCA US said it continues to build upon the foundations (twice bankrupt) first established by Walter P. Chrysler in 1925, as well as a Fiat heritage that dates from 1899.

FCA US employs more than 77,000 employees worldwide, with 96 % based in North America. FCA US operates 36 manufacturing facilities, including 23 in the United States, six in Canada and seven in Mexico.

Ken Zino is an auto industry veteran with global experience in print, broadcast and electronic media. He has auto testing, marketing, public relations and communications expertise garnered while working in Asia, Europe and the U.S.
View all posts by Ken Zino →
This entry was posted in news analysis and tagged autoinformed, autoinformed.com, fca, NYSE. Bookmark the permalink.

2 Responses to FCA is New Name for Fiat Chrysler Automobiles