Posted on 6 November 2019 by Kenneth Zino

Cost reduction is said to be one of the main reasons for this merger. Capacity reduction through plant closings is likely. Click to Enlarge.

The exorbitantly expensive world of developing clean vehicles is on view in the proposed FCA-PSA Group mergers. The business case is simply put as a way to spread costs as a consolation would result in FCA-PSA group emerging as the fourth-largest Global automaker. Its annual production volume would be +8 million Light Vehicles per year. It would be larger than Hyundai Group, General Motors, Ford and Honda. It could compete with the current Global Big Three – Volkswagen Group, Toyota and Renault-Nissan-Mitsubishi.

Consultancy LMC observes that the high Research & Development expenditure involving platform creation and merging, electrification, as well as other safety, emission and autonomous driving technologies, “is expected to remain a drag on industry profitability over the course of the next decade, and further consolidation is likely.”

Based on current manufacturing facilities, the merged FCA-PSA group would have a combined estimated global capacity of almost 14 million units*. However, the deployment rate would be low ~58%, which would leave the group with almost, gulp, 6 million units of spare capacity worldwide.

Capacity Use is Dreadful 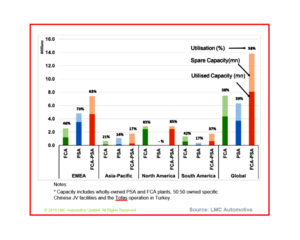 Cost reduction is said to be one of the main reasons for this merger. Capacity reduction through plant closings is therefore likely.

While Carlos Tavares as CEO at PSA has been successful in generating slight growth at PSA/Opel without closing plants, it is probable that there will be pressure to follow engineering and purchasing synergies with the more politically explosive operational rationalization. (Tavares Replaces Pélata as COO of Renault as Fallout from Spy Case that Embarrassed French Government Continues)

LMC says that with control of both FCA and PSA Asian facilities shared with JV partners, Europe is likely to bear the brunt of any potential plant closures. Both FCA and PSA already have plants earmarked as ‘at risk’: Fiat’s Kragujevac facility in Serbia, as well as PSA’s UK facilities, may now find their medium-term future even less secure.

However, in parallel to the PSA-Opel tie-up, the potential wind down of existing European FCA JVs may increase volumes for FCA-PSA factories. LMC cites the Renault-built and derived Fiat Talento mid-sized LCV. It could be replaced by a PSA-based model and built in-house.

For enthusiasts as well a workers there are other threats. How about a spin-off FCA’s expensive low-return Alfa Romeo/Maserati operations? Simple math here: It would provide funds for the new FCA-PSA group while improving its utilization rate.