FCA Sells Minivans to Google’s Waymo for Driverless Use 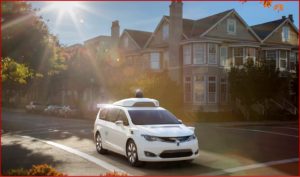 FCA and Waymo first announced their partnership in May 2016.

Google’s self-driving wing Waymo – and threat to established automakers – will  expand its fleet with an agreement to add up to 62,000 Chrysler Pacifica Hybrid minivans. The latest four-wheel expansion follows a prior deal, announced in January, to deliver thousands of vehicles to Waymo’s driverless transportation service. Vehicle delivery is expected to begin in late 2018.

FCA US and Waymo they are beginning “discussions about the use of Waymo self-driving technology, including potentially through licensing, in FCA-manufactured vehicles available to retail customers.”

Currently, Waymo – much to the embarrassment of the Detroit Three and other automakers – is the only company with a fleet of fully self-driving cars, with no one in the driver seat, in use on public roads. Later this year, Waymo will launch the world’s first self-driving transportation service, allowing the public to use Waymo’s app to request a vehicle.

“Waymo’s goal from day one has been to build the world’s most experienced driver and give people access to self-driving technology that will make our roads safer,” said John Krafcik, CEO of Waymo, and a former Ford and Hyundai senior executive.  “We’re excited to deepen our relationship with FCA that will support the launch of our driverless service and explore future products that support Waymo’s mission.”

FCA and Waymo first announced their partnership in May 2016. The industry-first collaboration brought engineers from FCA and Waymo together to integrate Waymo’s fully self-driving system into the Chrysler Pacifica Hybrid minivan. At the time was framed as a way of leveraging each company’s individual strengths and resources. Since then, FCA and Waymo engineers have continued working together to support Waymo’s expansion and to modify the Chrysler Pacifica Hybrid minivan with self-driving technology.

The self-driving Chrysler Pacifica Hybrid minivan is clearly one of several advanced vehicles on the road today equipped with Waymo’s self-driving system, including a powerful hardware suite and software enhanced during 6 million miles of on-road testing.

To date, FCA has delivered 600 Pacifica Hybrid minivans to Waymo.