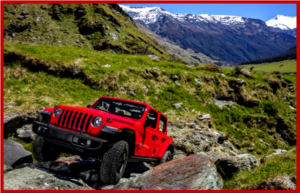 The brands* the company is named after – Fiat and Chrysler – both posted huge declines. Sales of Fiat vehicles declined 45 percent to 1,404 vehicles. Chrysler brand total sales fell 18 percent in April to 14,189 vehicles compared with the same month a year ago. The Chrysler Pacifica minivan posted a 5 percent retail sales increase to 7,864 vehicles.

Troubling were Ram Truck brand sales, which in total declined 9 percent to 43,074 vehicles (36,560 retail) compared with the previous year. With fuel prices rising along with interest rates, this is one to watch. Dodge brand total sales rose 4 percent to 40,994 with the Dodge Journey setting a new April record as sales climbed 39 percent to 11,638 vehicles. Alfa Romeo brand sales of 1,847 vehicles were up compared with the same month a year ago. Giulia led the brand with 1,123 vehicle sales followed by Stelvio at 702 vehicles. This is a very expensive hobby for FCA management given the extremely low volumes.

FCA is still trying to shake off a reporting scandal uncovered during July of 2016 that resulted in murky numbers.  US’s reported vehicle sales represent unit sales of vehicles to retail customers, deliveries of vehicles to fleet customers and to others such as FCA US’s employees and retirees as well as vehicles used for marketing. Most of these reported sales reflect retail sales made by dealers out of their own inventory of vehicles previously purchased by them from FCA US.

Reported vehicle unit sales do not correspond to FCA US’s reported revenues, which are based on FCA US’s sale and delivery of vehicles, and typically recognized upon shipment to the dealer or end customer. As announced on July 26, 2016, FCA US has modified its methodology for monthly sales reporting as follows:

Sales to retail customers by dealers in the U.S. are derived from the New Vehicle Delivery Report (“NVDR”) system and are determined as the sum of (A) all sales recorded by dealers during the month net of all unwound transactions recorded to the end of that month (whether the original sale was recorded in the current month or any prior month); plus (B) all sales of vehicles during that month attributable to past unwinds that had previously been reversed in determining monthly sales (in the current or prior months).

Fleet sales are recorded upon the shipment of the vehicle by FCA US to the customer or end user.

Other retail sales are recorded either (A) when the sale is recorded in the NVDR system (for sales by dealers in Puerto Rico and limited sales made through distributors that submit NVDRs in the same manner as for sales by U.S. dealers) or (B) upon receipt of a similar delivery notification (for vehicles for which NVDRs are not entered such as vehicles for FCA employees).

FCA US is based on the foundations of Chrysler Corp., established in 1925 by Walter P. Chrysler and Fabbrica Italiana Automobili Torino (F.I.A.T.), founded in Italy in 1899 by a group that included Giovanni Agnelli.