Posted on 3 October 2019 by Kenneth Zino 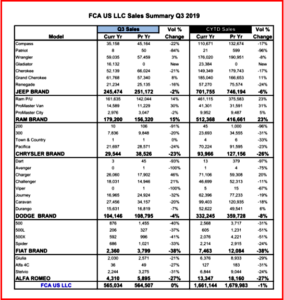 The announcement came shortly after the Securities and Exchange Commission charged Michigan-based automaker FCA US LLC, and its parent company, Fiat Chrysler Automobiles N.V., for misleading investors about the number of new vehicles sold each month to customers in the United States.  FCA US and Fiat Chrysler Automobiles have agreed to pay $40 million to settle the charges. Translation: FCA bought its way out of all legal troubles with the SEC here for a mere $40 million.

According to the SEC’s order, between 2012 and 2016, FCA US issued monthly press releases falsely reporting new vehicle sales and falsely touting a “streak” of uninterrupted monthly year-over-year sales growth. However, the growth streak ended in September 2013. (FCA is New Name for Fiat Chrysler Automobiles)

Nonetheless FCA touted three sales records for the third quarter as buyer bought or leased premium technology and interior upgrades on heavy-duty trucks. The Jeep Wrangler had a record quarter because of new “limited-edition” models. Dodge Challenger reported a record third quarter, while the Charger had its highest level of third-quarter sales in 13 years. Over the past decade, Challenger and Charger sales have increased more than 60% as FCA returned to the hot rod market.

Ken Zino is an auto industry veteran with global experience in print, broadcast and electronic media. He has auto testing, marketing, public relations and communications expertise garnered while working in Asia, Europe and the U.S.
View all posts by Kenneth Zino →
This entry was posted in sales and tagged auto industry commentary, autoinformed.com, fca, Kenneth Zino, sec, us auto sales. Bookmark the permalink.