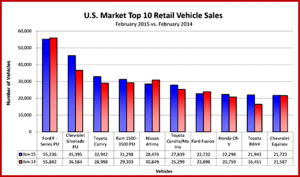 Offshore nameplates held five of the Top Ten sales spots. Toyota Camry regained its place as the top-selling car in the U.S. after being unseated by the Toyota Corolla last month and the Nissan Altima in December.

Record levels of snow and ice in many parts of the U.S. were said by some observers to have hurt auto sales. However, other analysts counter such weather spurs the purchase of all-wheel and 4-wheel drive vehicles, a particularly strong point of Detroit Three offerings in a time a cheap fuel where their sales gains have been evident.

Ken Zino is an auto industry veteran with global experience in print, broadcast and electronic media. He has auto testing, marketing, public relations and communications expertise garnered while working in Asia, Europe and the U.S.
View all posts by Ken Zino →
This entry was posted in sales and tagged aiada, autoinformed, autoinformed.com, Ken Zino. Bookmark the permalink.