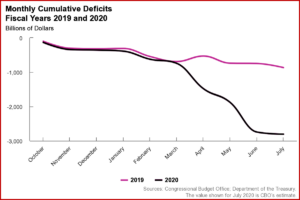 The federal budget deficit in July 2020 was $61 billion, CBO estimates, compared with a deficit of $120 billion in the same month last year. That decrease, following three months of mind-blowing larger deficits, happened because payment deadlines for individual and corporate income taxes were delayed from April and June to July. Tax receipts were unusually large in July as a result. All told, from April through July, revenues were down 10% from last year’s amounts.

The cumulative federal budget deficit for the first 10 months of fiscal year 2020 reached $2.8 trillion, +$1.9 trillion more than the deficit recorded during the same period last year. Revenues were 1% lower and outlays were 51% higher through July 2020 than during the same 10-month period in fiscal year 2019.

Spending in July Rose by 68%

Total spending in July 2020 was $624 billion – $253 billion more than outlays in July 2019 – largely from legislation enacted in response to the corona virus pandemic. If not for the shift of some federal payments from August 2020 to July 2020, total spending would have been $197 billion (+53%) more than in the same month last year.

Major pandemic-related changes in expenses in July were as follows (the CBO amounts are adjusted to exclude the effects of the timing shifts):

Other major payments in July:

Deficit More Than Tripled in the First 10 Months

Revenue collections and outlays in fiscal year 2020 can be divided into two periods: before and after the start of the economic disruption caused by the pandemic. After Covid, from April through July, the deficit this year was an estimated $2.1 trillion, compared with $176 billion during the same period last year. If not for the shift of some payments from August into July this year, the deficit for April through July would have been $2.0 trillion.