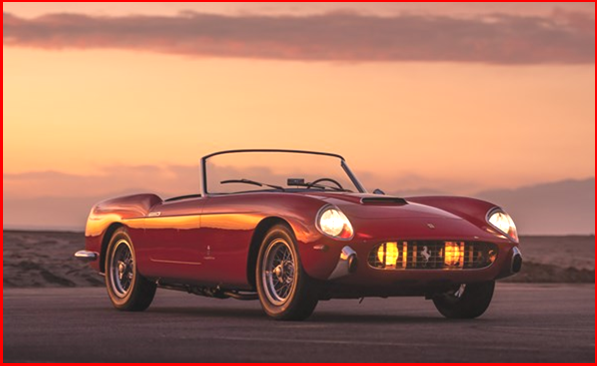 The most valuable performance car brand in the universe?

A 1958 Ferrari 250 GT Cabriolet Series I is set to star at RM Sotheby’s Arizona auction, says Sotheby’s with abundant self-interest. The 250 GT Cabriolet Series I joined by a 250 Europa GT Coupe, alongside additional Ferrari highlights  and tomorrow at the Arizona Biltmore in Phoenix. The Arizona lineup also includes modern performance and supercars, led by Pagani Huayra Roadster.

There are 147 motor cars and a selection of memorabilia on the block. Ferrari’s road cars of the 1950s and 60s were some of the fastest -and these days – some of most expensive automobiles on the planet. The built-for-touring 250 GT Cabriolet Series I – sold to support Enzo’s racing addiction – had smooth lines defined by its covered headlamps, bumperettes, and tiny taillights in the rear wings. Considered by some to be one of Pinin Farina’s most elegant designs, ownership of a 250 GT Cabriolet signaled a taste for engineering and performance and transportation as a statement.

The 250 GT Series I set for RM Sotheby’s Arizona sale, chassis no. 0913 GT, is the 25th of just 40 cabriolets built. Offered from after two decades of single ownership, 0913 comes to auction a proven rally and tour participant, having been shown by its current owner at numerous prestigious events, including the 15th annual Concorso Italiano, and driven on the 27th annual Colorado Grand. A wonderful grand touring Ferrari in all regards, 0913 would be an astute addition to any collection (Est. $6,000,000 – $7,000,000).

“Our 2020 Arizona auction offers some of the most desirable models across the board,” said Gord Duff, Global Head of Auctions, RM Sotheby’s. “From distinguished grand tourers and classic sports cars in outstanding condition to highly sought-after modern performance and supercars, as well as notable motor cars that boast interesting stories and long-term ownership histories, this sale caters to the tastes of every enthusiast.”

For more information on RM Sotheby’s Arizona auction and to view the complete digital catalogue  – rmsothebys.com.

Ken Zino is an auto industry veteran with global experience in print, broadcast and electronic media. He has auto testing, marketing, public relations and communications expertise garnered while working in Asia, Europe and the U.S.
View all posts by Kenneth Zino →
This entry was posted in design and styling, performance, prices and tagged auto industry commentary, autoinformed.com, Battista "Pinin" Farina, Kenneth Zino, Sotheby’s. Bookmark the permalink.