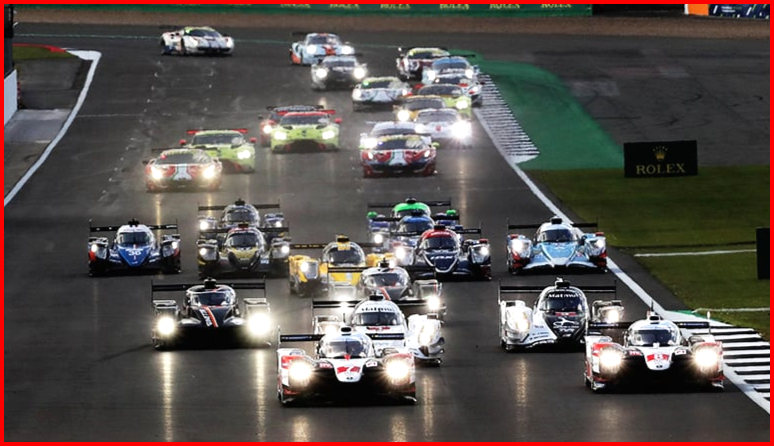 Pit stops proved to be an influential factor, with Toyota  gaining prized seconds at tire changes.

The #8 TS050 HYBRID of Sébastien Buemi, Kazuki Nakajima and Brendon Hartley earned second place, less than two seconds behind its sister car, in front of a weekend crowd of 49,600 who saw a race conducted in changing weather conditions. The #3 Rebellion car  of Berthon, Derani, Duval finished third.

As the race approached the 90-minute mark, an intense rain shower-soaked Silverstone. A lengthy Safety Car period allowed cars to switch back to slicks as the track dried, and the #97 crew found themselves hunting down the leaders in the closing stages, with Martin proving he had the pace to challenge for victory. In the end he was only denied his chance to fight for the win by a slow back marker and a rebellious prototype.

Pit stops proved to be an influential factor, with Toyota  gaining prized seconds at tire changes. This is more significant this season due to regulation changes which increase the refueling time for the TS050 to make sure that Ginetta and Rebellion are able to fill up within the same time, despite adding 50% and 61% more fuel to their tanks respectively.

Brendon held the lead on his #8 race debut despite losing a few seconds in the pits due to a windscreen wiper repair, but Kamui was directly behind and overtook soon after as half distance approached. The race entered its final two hours under a safety car, which brought the top three closer together.

When racing resumed after a 23-minute safety car period, the two TS050 Hybrids led and soon their margin over the #3 Rebellion was increased to almost a minute when it served a stop-and-go penalty for a technical infringement.

The highly-competitive LMP2 category which has a total of eight teams for Season 8 – including four brand new squads – saw newcomers Cool Racing take a win on their WEC debut.  The victory came after the Oreca 07 Gibson car lost one of its crew after team-mate Alexandre Coigny was forced to sit out due to an injury he sustained during yesterday’s ELMS race.  This left Nicolas Lapierre and Antonin Borga to bring the No. 42 car home 49.311s clear of runners-up Signatech Alpine Elf in the No. 36 Alpine A470 – Gibson car driven by Thomas Laurent, André Negrão and Pierre Ragues. Third place finishers Racing Team Nederland made up of Frits Van Eerd, Giedo Van Der Garde and Job Van Uitert had a strong advantage at the race’s half-way point in the No. 29 Oreca but the race’s second safety car allowed Cool Racing to take the lead where they remained for the rest of the race.

In GTE Pro, the new Porsche 911 RSR (2019 model year) seized a double victory at its race debut. The Italian Gianmaria Bruni and Richard Lietz from Austria crossed the finish line first in the No. 91 car. The reigning world champions Michael Christensen (Denmark) and Kévin Estre (France) claimed second place in the 515 horsepower No. 92 sister car. Deft tactics from the world champion team, strong driving performances, swift pit stops, and a reliable and fast car in both dry and the wet conditions were decisive in the double win.

Aston Martin Racing came away from the opening round with podium finishes in both the GTE Pro and Am classes after delivering competitive performances on home soil this past weekend. Alex Lynn (GB) and Maxime Martin (GB) eventually finished the 4 Hours of Silverstone in a strong third position in the #97 GTE Pro car, having led the race comfortably after the first stops. The Vantage GTE, embarking on its second season in the Pro class, was the car to beat in the early stages, leading the race in both classes in the second stint. But, when a heavier-than-expected rain shower and multiple Safety Car periods threw the race into confusion just before half distance, both the #97 and the sister #95 car of Danish duo Nicki Thiim and Marco Sørensen dropped down the order when they and several rivals had to make an additional stop for wet tires.

The next round of the FIA WEC takes place in Japan for the 6 Hours of Fuji on 6 October.

Ken Zino is an auto industry veteran with global experience in print, broadcast and electronic media. He has auto testing, marketing, public relations and communications expertise garnered while working in Asia, Europe and the U.S.
View all posts by Ken Zino →
This entry was posted in racing and tagged auto industry commentary, autoinformed.com, automotive blog, FIA WEC, Ken Zino, Silverstone. Bookmark the permalink.