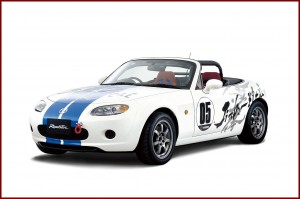 Fiat is barely breaking even because of its dependence on Europe with the ongoing Eurozone economic crisis. Mazda, post Ford, has its own liquidity issues.

In a joint announcement out of Turin and Hiroshima this morning, Fiat Group Automobiles  and Mazda Motor Corporation have signed a non-binding Memorandum of Understanding for the development and manufacturing of a new roadster for the Mazda and Alfa Romeo brands based on Mazda’s next-generation MX-5 rear-wheel-drive architecture.

The MoU states that both Fiat and Mazda will develop two “differentiated, distinctly styled, iconic and brand-specific light weight, roadsters featuring rear-wheel drive.” The Alfa Romeo and Mazda models will each be powered by specific proprietary engines unique to each brand.The cars will be built in Hiroshima.Total production of the MX-5 sports car – or Mazda Roadster in Japan – reached 900,000 units on 4 February 2011, 21 years and 10 months after mass production of the first-generation MX-5 began in April 1989.

“This agreement clearly demonstrates our commitment to Alfa Romeo and the determination to grow it into a truly global brand,” said Fiat CEO Sergio Marchionne. Fiat is barely breaking even because of its dependence on Europe with the ongoing Eurozone economic crisis. Joint ventures are one way to cut capital expenditures.

The weak Q1 consolidated Fiat-Chrysler Group return of 4.2% on sales of more than €20 billion stood in stark contrast to Chrysler Group’s return of 7% on €872 million in revenues during the quarter. Simply put, courtesy of U.S. and Canadian taxpayers, a reorganized Chrysler, now 58.5% owned by Fiat, is providing the profits for the newly created Fiat-Chrysler Group. Europe in general (-7% in sales) and Italy in particular (-21%, and predicted to have the lowest sales this year since 1968!) are damaging returns at Fiat, areas where Chrysler has little exposure since its total international sales were a mere 49,000 in Q1. Fiat currently has 1,250,402,773 shares outstanding.

“Establishing technology and product development alliances is one of Mazda’s corporate objectives and this announcement with Fiat is an important first step in that direction said Takashi Yamanouchi, Mazda’s Representative Director and Chairman of the Board, President and CEO. Mazda is also facing a liquidity crisis now that it can no longer rely on former owner Ford Motor for capital.

Mazda made a public offering of shares in March and obtained financing through a subordinated loan to raise funds to strengthen its weak financial base. Because of the issuance of new shares, the total number of shares outstanding has increased to 2,999,377,399 out of an incorporation limit of 3,000,000,000. Mazda now proposes that at its annual meeting at the end of June that the total number of shares that may be issued shall be doubled to 6,000,000,000, a massive watering of the stock.

The Final Agreement with Fiat is expected to be signed in the second-half of 2012. Mazda and Fiat have also agreed to discuss further opportunities for co-operation in Europe.