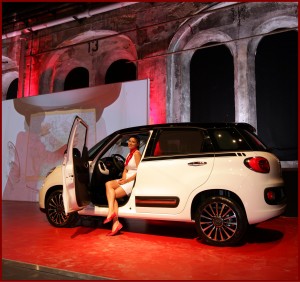 The 500L goes on sale in the U.S. next year. It will be followed by a small Jeep and possibly a Fiat crossover version.

The Fiat plant in Melfi, in Southern Italy is in the process of preparing to build a new baby Jeep vehicle and a new Fiat crossover beginning in 2014. The corporate owner of Chrysler Group and the Jeep brand said that following an investment of more than €1 billion, Melfi will be one of the most advanced car assembly plants in the world. When the upgrades are completed, Melfi will have increased flexibility along with the ability to produce up to four different models on the same assembly line consistent with the best current Japanese production methods.

Existing production processes for the best selling Fiat Punto are being modified to handle what’s called a new modular Small Wide platform, also known as Compact Wide – one of Fiat-Chrysler’s three major architectures. This platform can also be adapted to produce larger vehicles. Fiat confirmed that the vehicles will have the product and safety requirements to comply with U.S. regulatory standards. This means that vehicles produced at the Melfi plant will be export ready, including the new SUV and crossover models with no need for further modifications.

The first of the two new models will be a Jeep utility vehicle that represents the brand’s entrance into a new market segment, a baby Jeep smaller and less expensive than the Patriot and Liberty replacements that will enter production in Toledo, Ohio next year. Melfi will be the only plant in the world to produce this model and, as with all Jeep products; it will be sold in markets worldwide.

In addition to the new Jeep, Melfi will also produce the new Fiat 500X, the latest addition to the 500 family that is even larger, and more spacious and than the 500L launched 3 months ago to what is thus far great sales success in Europe. IT will appear in the U.S. next year.

The planned investments will also include technological upgrades in all areas of the plant, including a new stamping shop, new panel and body welding lines, 500 new welding robots and introduction of the latest environmental technologies in the paint shop.

Total production capacity based on three shifts will be 1,600 vehicles per day. Fiat Group is the largest employer in Italy, excluding the government. Chairman John Elkann and CEO Sergio Marchionne – with Prime Minister Monti were at the announcement.