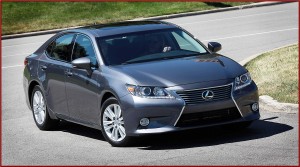 When riding on the optional all-season tires sized at 225/45R18, ES tracks straight, but lack of sidewall compliance from the trendy looking 45-series aspect ratio tires results in a jolting ride.

The original ES 300 Lexus, along with the LS 400, established the Japanese carmaker as a leader in plush, quiet and affordable luxury automobiles, all qualities then scoffed at by German automakers until it became apparent 20 years ago that Lexus was a force to be reckoned with in the U.S. luxury market. Now here is market leader Lexus presenting its sixth generation ES along with its first ever hybrid in this model line – the ES 300h with an EPA rating of 40 mpg city.

A day of test-driving both of the front-drive mid-size cars shows that once again, these are well-equipped, quiet luxury models. However, Lexus engineers have abandoned the plush ride that made its name, for a distinctly German chassis setup that verges on the harsh and intrusive. Lexus executives claim that this is what customers want – which could come as news to the one million existing ES owners. This thesis will be tested after the cars are priced – and the strong Yen will be a factor here – and final EPA numbers are attached to their window stickers.

Both of the new ES models are based on and use the same gas and hybrid powertrains as the 2013 Toyota Avalon, which seems on paper an unusually strong car from both technical and design viewpoints. Avalon will not only give Ford Taurus, Buick La Crosse and Chevrolet Impala strong competition next year in a full-size car segment once dominated by the Detroit Three, but it will challenge the new Lexus as well.

The latest ES 350 is about 1 inch longer in overall length at 193 inches, and adds 2 inches to its wheelbase, now 111 inches – with most of the added legroom going to rear passengers. When riding on the optional all-season tires 225/45R18 (215/55R17 standard) the ES tracks straight at all speeds, but the lack of sidewall compliance that results from the trendy looking 45-series aspect ratio tires results in a jolting ride. This unwanted firmness is noticeable from the wheel reaction to low amplitude, high velocity tar strips, as well as larger amplitude frost heaves and pothole and broken pavement jolts. This I will bet will be a surprise to those familiar with previous iterations.

In a partially successful attempt to improve turn-in response slowed by the longer wheelbase, the steering ratio is quickened to 14.8:1 (down from 16:1) for the electric power steering, which like all electric steering setups is marshmallow soft on center. Four-wheel power-assisted disc brakes with ABS, Electronic Brakeforce Distribution, Brake Assist (BA), Traction Control (TRAC) and Vehicle Stability Control (VSC) comprise an excellent technical package of electronic driving aids that makes the car idiot resistant.

For the foolish and fate tempting – including myriad distracted drivers on their cellphones –  ES has a class-leading 10 airbags as standard equipment, including driver and front passenger knee, front and seat-mounted air bags, as well as rear seat-mounted side airbags and front and rear side curtain airbags. Whiplash Injury Lessening front seats are designed to limit excessive head movement in rear-end collisions, helping to decrease the severity of these injuries

Power for the ES 350 is from a 3.5-liter V6 engine with variable valve timing for the intake. It’s  rated at a more than sufficient 268 horsepower at 6,200 rpm and 248 lb.-ft. of peak torque at 4,700. The six-speed sequential-shift automatic transaxle is electronically controlled and provides flawless shifts. The optional paddle shifter is great fun, but the computer overrides driver inputs that would work the engine close to its redline with a ding-ding chime that says no you are not getting that downshift.

Preliminary ES 350 EPA-fuel economy estimates of 21 mpg city, 31 mpg highway and 24 mpg combined are almost identical to those of the Toyota Avalon, which is EPA-rated at 25 mpg combined and 21 city, 31 hwy. This is not exactly world beating, for comparison consider the Buick La Crosse, which comes standard with a mild hybrid or e-assist system is rated at 29 combined, 25 city and 36 highway. 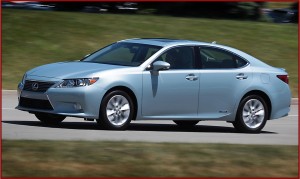 ES 350 has dual exhaust pipes, while the ES 300h has an exclusive rear design with hidden exhaust and an integrated rear spoiler.

The hybrid powertrain is the same as the Avalon’s too. With a 2.5-liter four-cylinder Atkinson cycle engine – 12.5:1 compression ratio – the 300h is expected to earn EPA fuel economy ratings of approximately 39 mpg combined, 40 mpg city, 39 mpg highway. The ES 300h generates 200 total system horsepower. With a pair of electric motors incorporated into the front-drive transaxle. The hybrid engine is also notable for its electric water pump, electric power steering, and an integrated hybrid electric motor/generator, meaning there are no accessory belts. The beltless setup should help improve fuel economy and overall reliability for what is already one of the most reliable cars on the planet. Sales of the company’s full hybrid vehicles have surpassed 4 million units globally since the end of April 2012.

In the ongoing folly of the Government favoring some technologies and ignoring the free market, the ES 300h adds an EV mode which allows short distance drives – at reduced speeds of less than 25 mph – using only the power from the tiny 1.6 KWh nickel metal hydride battery pack. Whether this qualifies for privileged HOV lane access – the hybrid car at best will only go one mile on electric power – remains to be seen. As it is, the rear-mounted battery pack subtracts almost 3 cubic feet from the standard 15 cubic foot trunk. The hybrid curb weight is also up to 3660 pounds compared to the gasoline car’s 3549 pounds. One, perhaps dubious, advantage here is the battery results in a 59% to 41% front-to-rear weight distribution, which makes for almost neutral handling in turns. Pricing for the hybrid Es is at yet unknown, but Lexus implied it would be slight. 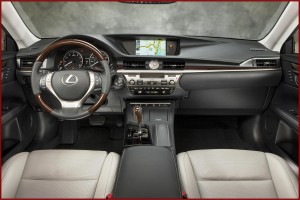 The optional HDD Navigation System includes voice command, an integrated backup camera, an eight-inch screen, and the next generation Lexus Enform system with App Suite – an enabler of distracted driving.