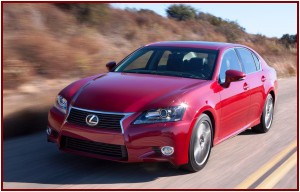 GS 350 is the most serious performance sedan Lexus has produced yet. The original and only marginally successful GS was launched in 1993.

Lexus made its name in the U.S. starting in 1989 with the LS 400 and ES 300 with smooth, quiet and plush cars that under priced – by more than $20,000 –  Mercedes Benz and BMW offerings. The addition of the Camry-derived RX-300 crossover SUV – the first luxury crossover ever introduced in 1998 – catapulted Lexus to sales leadership in the U.S. luxury car market, which it has more or less dominated ever since.

The new 2013 Lexus GS 350 mid-size performance sedan is its latest product  assault, this time directed against the Germans, and it is  the most serious performance sedan Lexus has produced yet since the original and only marginally successful GS was launched in 1993. The GS sedan is based on a highly modified SC 430 platform.

The new 2013 GS is powered by a familiar 3.5-liter V6 engine, with four cams, four valves per cylinder with dual Variable Valve Timing and a six-speed automatic. At 306 horsepower and 276 lb.-ft. of torque, it is one of the more powerful base engines in the segment, as well as the only one at the moment with both direct and sequential fuel injection.

The GS 350 also, surprisingly, outperforms the BMW in extreme performance driving.  The transmission has some features adopted from the Lexus IS F high-performance sedan — including faster shifts, earlier torque converter lockup and downshift throttle blips — to support four driving modes that can be operated by toggling the new Lexus Drive Mode selector.

Naturally, the runner is a GS 350 F-sport package. It’s a  muscular, fast, flat cornering sedan with extremely  responsive steering. When the Germans complete their detailed competitive reviews they will be surprised at how good, as in razor sharp – the GS 350 is and how well the newly rigid chassis with electronic controls performs.

The latest generation of Lexus’ Vehicle Dynamics Integrated Management system coordinates Lexus Dynamic Handling; the Anti-lock Braking System; Traction Control; Vehicle Stability Control; and Adaptive Variable Suspension (AVS). AVS helps front and rear wheel control and provides a more direct response to the driver’s actions. The LDH system monitors vehicle speed and yaw rate, steering angle and speed, and lateral G to calculate the required rear wheel steering input, to a maximum rear wheel angle of 2 degrees. At most speeds below 50 mph the GS front and rear wheels turn in opposite directions. In certain conditions at speeds over 50 mph the GS front and rear wheels turn in the same direction. The handling system coordinates all of the above.

This raises a couple of  issues – price for the performance models and can you live with such a setup that is good on pool table smooth roads but is distinctly harsh on the broken pavement  most people drive on in these times of a bankrupt Highway Trust Fund and declining gasoline tax revenues. As to the can you live with it Q, be sure to drive the GS 350 in whatever guise before you buy one.

The F-sport is the flagship, and like all flagships, it comes at a premium price, adding $5,690 to the price with another $1,735 for the split screen navigation symptom. Here, the marketplace will decide if this is the right pricing point. The unknown is competitive responses by the Germans,  likely in the guise of subvention in  lease rates or regional promotions.

The wider width The 2013 Lexus GS changes from previous rounded Lexus designs by way of its more angular sculpted exterior. Lexus said it will lead the rest of the lineup in an “entirely new direction” that appears to me derivative of front and rear themes developed by Ford of Europe, Audi, BMW and Cadillac. Overall, the new GS sheet metal represents a “significant extension of the Lexus L-finesse philosophy that is the core of all Lexus product design,” according to Lexus.

Fins – yes fins – incorporated into the side of the tail lamps and the trunk help direct air over and past the car, resulting in what’s said to be a class leading coefficient of drag.  From the side, there are tapered lower rocker panel and the short front overhang. Width-enhancing front and rear wheel arches – the Japanese donor platform is narrow to an American eye; a key criticism of the previous GS – makes the car look wider.