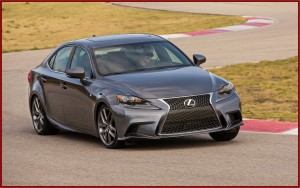 The third generation Lexus IS sedan is the Japanese company’s most ambitious attempt so far to run with the widely acknowledged benchmark in the compact luxury class – the BMW 3-series. The new 2014 IS sport sedan has an all-new multi-link rear suspension, a revised front suspension and electric steering derived from the GS sedan adopted to the smaller car. Perhaps more important are increases in the use of sophisticated steel alloys, laser-screw welding and structural adhesives that made higher chassis rigidity possible, one of the long standing strengths of German automakers. The overall initial impression the IS provides is one of a high quality Japanese car that is responsive and easily driven.

A day of test driving at Michigan International Speedway shows that IS core competencies revolve around the use electronic controls and the newly reinforced body structure. These allowed engineers to soften the spring rates while increasing the size of the stabilizer bars. By using the various chassis and engine control computers, which are now much more capable and mostly invisible in operation, the IS ride is smooth, body roll slight under all but extreme maneuvering, and the cornering forces generated high – very high and limited only by the coefficient of friction available at the 17- or 18-inch tire contact patches.

This allows the driver the illusion that his or her skill is making the IS go really fast. Actually, this is truly the ‘revenge of the nerds’ and thousands of lines of their computer code make this the best IS to date, one that is finally able to run against a BMW 3-Series and not get left behind. IS models, like many others, have sophisticated computer controls, which integrate anti-lock braking, electronic brake-force distribution, traction control, damping and vehicle stability control with the driver inputs to the electronic power steering, throttle and brake pedal.

Unlike earlier computerized systems, the latest ones cover far more driving situations, and  are slickly integrated and now even predictive, instead of slowly reactive. The upshot is a fully electronic car that is capable of driving at the limits all the time. These systems are now capable of producing faster lap times than professional racing drivers can without them. The IS system is a rollicking demonstration that Lexis is on top of  the state of this dark electronic art.

With its two, high-strung V6 engines with double overhead camshafts, 24 valves with continuously variable intake and exhaust timing, this small Lexus is very quick, and it is not just straight line fast either. The IS 250 is powered by a smooth 2.5-liter V6 rated at 204 horsepower at 6400 rpm and 185 lb.-ft. of torque at 4800 rpm. The engine is matched to a six-speed (alas, where’s the eight-speed?)  electronically controlled transmission  that has a sequential manual-shifting mode with rev-matched downshifts in Sport mode as the electronics overrule ham-fisted driver inputs.

The even more powerful IS 350 has a 3.5-liter V6 with direct and port fuel injection to increase power. The 3.5 produces 306 horsepower at 6400 rpm, 277 lb.-ft. of torque at 4800 rpm. The 350 inherits the eight-speed, Sport Direct Shift automatic transmission from the older IS F high-performance model. This transmission features paddle shifters (I hate them, and you can still get a true 6-speed manual or 8-speed automatic in the 3-Series) and what’s dubbed a G-force Artificial Intelligence system, which automatically selects the optimum gear and downshift pattern in response to, guess what, G forces being generated.

Optional for both IS models, is an electronically controlled all-wheel drive system designed to enhance traction and grip under all driving conditions by automatically varying front-to-rear torque balance from 50:50 to as much as 30:70. Skip it, and the same applies to BMW’s awd. The heavier awd (starting at $39,380) lightens your wallet, adds weight, and notably slows acceleration and response times. If you live in the Snow Belt, a rear-wheel drive chassis setup is a loser, unless you can park a performance car during the winter, which given the steep IS and 3-Series prices – more below – might be a distinct possibility for its buyers.

The optional F Sport package, not tested here, includes 18-inch wheels and firmer suspension tuning, as well as some different interior and exterior design cues. It is available for IS 250 and IS 350 rwd and awd models. The Adaptive Variable Suspension used on IS 350 F Sport allows the driver to tune the F Sport’s ride characteristics with a choice of settings: Normal, for everyday use,  and Sport S or Sport S+ mode, for more body control and what is termed ‘agility.’

IS 350 models and IS 250 F Sport, now have an intake sound generator that is said to create a more sporting engine tone, a technology pioneered by the Germans long ago and in widespread use.

Claimed IS acceleration times, which I have no argument with based on my limited testing, include for the 2.5-liter V6 a 0–60 mph acceleration of 7.9 seconds and a 1/4-mile trip of 16 seconds flat. The top speed, electronically limited, is 140 mph. Fuel economy is rated at 21/30/24 mpg city/highway/combined for rwd. I averaged about 28 in moderate suburban driving based on the (unregulated – nobody tests these) trip computer. The awd is 20/27/23.

It is hard to say what will be more important to the buyers this fall. Naturally, there is the new Lexus front snout look that is working its way through the lineup, or in marketing talk, a “dynamic spindle grille,” which is even more dynamic or whatever you call it. Moreover, the F-Sport snout is the most exaggerated yet. In addition, the wheelbase is lengthened about three inches and width is increased by nearly half an inch, which will significantly increase rear seat room, a glaring weakness of the current IS.

An industry first comes via free real time traffic and weather on all multi-media systems. This might be more enticing to the wired generation than the performance aspects discussed above. The IS has two systems: a standard display audio system, or an optional navigation system. The navigation system is operated by a multi-function display, which also allows adjustment of the climate, audio, and phone controls, among other driver distracting things.

Once you get past the marketing of free telematics as something thus far unique, the substantive sport sedan issue remains whether Lexus can continue to chip away at BMW’s dominance in the small sporty car class in the face of the impressive new 3-Series lineup and the impending 4-series, no trivial matter. (Read AutoInformed on BMW Shows a “Concept” 4-Series at NAIAS)

Lexus prices are steep, ranging from $36,845 to a breathtaking $55,230, which is roughly the territory where the 3-Series now also resides. Even the new Cadillac ATS can top $50,000 for a compact sedan that is fully competitive here. Lexus is fighting a strong Japanese Yen, and will face pricing pressure from the Germans if they feel threatened. The days of ignoring Lexus are long over. The new rear-wheel-drive 320i just on sale starts at $33,445 with destination; 320i xDrive (all-wheel-drive) starts at $35,445, but options quickly add up as they do on the Lexus.

Lexus is exploring new territory here. Its pricing advantage is now gone, but so is its former lack of competitiveness. Initially this won’t be a problem when the IS starts appearing in showrooms this summer, but a cautionary note comes from the Lexus GS experience of last year.

Initially the GS (See First Drive – 2013 Lexus GS 350 Sport Sedan) aimed at the BMW 535i sold well as showrooms were stocked, but once you got past the early adapters and those with the need for what was perceived as the latest and greatest, sales dropped off. Year-to-date, the competitive GS 350 has sold only 5,325 cars, a 25% decline, the reasons for which Lexus executives at the IS preview feigned ignorance. Compare this to the BMW 535i ytd at more than 17,000, with 5,200 sold in April alone. Therefore, in spite of increasing competence at Lexus, the chase is still from behind.

Ken Zino is an auto industry veteran with global experience in print, broadcast and electronic media. He has auto testing, marketing, public relations and communications expertise garnered while working in Asia, Europe and the U.S.
View all posts by Ken Zino →
This entry was posted in auto news, new vehicle, performance and tagged auto informed, autoinformed.com, automotive news, bmw 320i, IS 250, IS 350, Ken Zino. Bookmark the permalink.