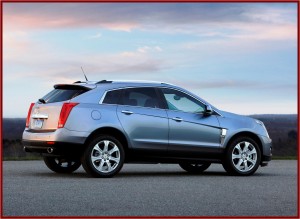 Finally a Cadillac crossover that follows the Lexus winning formula.

Of all the wrongheaded views held by auto enthusiast writers, none is more pervasive than the proposition that luxury vehicles have to be rear-wheel drive. The Lexus RX series, built from the Camry, demolished that assertion a decade ago. Not only did the RX300 vault Lexus to the number one sales spot in the U.S. luxury segment, it ended the reign of body-on-frame, rear-drive trucks as the basis for luxury vehicles. Moreover, Lexus had customer satisfaction and quality levels that embarrassed German and American makers. It still does.

Cadillac, once the uncontested U.S. luxury vehicle leader, is coming off a disastrous rear-drive SRX model built from an aging truck platform. It’s finally seeing things the way Lexus envisioned. The new 2010 SRX crossover is built from a GM front-wheel-drive architecture that offers relative efficiency in a mid-size package for five adults. 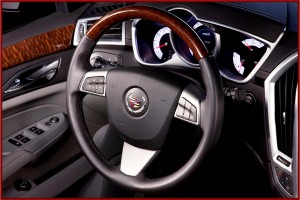 The interior has all the recent Cadillac design cues.

Two V6 engine choices and front- or all-wheel-drive, let customers decide what is best for them. In addition, changing from a rear-drive to a front-drive platform allows significant fuel economy increases.

Unfortunately, this is still an overweight vehicle at more than 4200 pounds, depending on equipment. My experience in this class says that 18-20 mpg is as good as it gets, and this requires driving finesse. Still, in the oft misunderstood area of fuel economy, replacing a 12-14 mpg vehicle with 20 mpg ones provides a significant benefit.

A new, 3-liter, direct fuel injection V6 engine is standard, and a new, 2.8-liter turbocharged V-6 is optional but only on loaded $50,000 versions. Fuel economy in the mid-20s on the highway is possible – EPA ratings range from 18 city to 25 mpg highway. These are the smallest-displacement engines Cadillac offers in North America, but outputs of 265 and 300 horsepower, respectively, and 223 and 295 lb. ft. of torque will suffice, but the base V6 engine is sluggish in our drives with its  9-second zero-to-60 mph time.

The Hydra-Matic six-speed automatic transmission helps save fuel by lowering the engine speed at constant highway speeds. A manual shift control enables greater driver selection when he is not distracted by cell phone use. The SRX also includes a driver-selectable “eco mode” that alters transmission shift points to maximize fuel economy.

The active, on-demand all-wheel-drive-system includes an electronic, limited-slip differential that distributes torque as needed from side-to-side along the rear axle, and from the front axle to the rear axle.

However, a fresh set of all-season tires or, better yet, four snow tires on the front-drive version will suffice for virtually all drivers.  The awd system adds weight and complexity, and hurts fuel economy. Eighteen-inch wheels are standard and 20-inch wheels are available.

Outside the SRX continues the emulate Lexus design theme of a decade ago with a good stance, minimal overhangs, and an integrated spoiler on the rearward edge of the roof. Cadillac claims it advanced the “Art and Science” design to create a crossover with “a dramatic diving gesture on the body side to impart the feeling of movement, even at rest.” In other words, about what every styling department now claims.

However, the much more radical looking Infiniti FX hasn’t been a sales success. In addition, even the Lexus RX350 suffered a stunning 20% sales decline to about 80,000 units last year. Cadillac will have to fight its way into this segment, where Acura and BMW are also active, customer by scarce customer. A more radical look would detract, as it did from the previous SRX.

Production is now underway. The old model was listed in the $41,000 to $48,000 range, before generous and, as it turns out company threatening, rebates and lease terms were applied. The new SRX starts with roughly the same pricing.