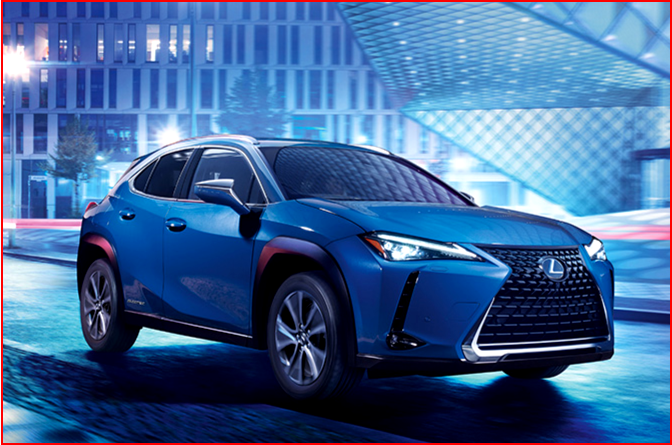 The Lexus UX 300e’s high-output motor should make for sharp acceleration. High-capacity batteries located directly underneath the floor of the cabin deliver a low center of gravity and 400 km-driving range. Combined it’s claimed with new connectivity technology, the 300e maximizes advantages of EVs while realizing driving performance and sale-ability in a popular crossover package.

The world’s largest car market with a communist government that could set the course of clean air vehicles for decades was home to the global debut the first battery electric vehicle from Lexus at the Guangzhou International Automobile Exhibition. Designed to meet the regulations of China and Europe, the world premier was a reminder – as if automakers need another one – that regulators and emerging green customers have a large say in their designs. Lexus of course is late to the amperage party, puzzling since it led the predecessor hybrid segment.

When the concept version of the Lexus EV hatchback was unveiled at the Tokyo Motor Show to media late in October, Lexus International President Yoshihiro Sawa said Lexus would sell EVs in China, North America, and other regions. The EV is expected to first appear in Europe and Chinese markets later next year. High prices and infrastructure and recharging issues have limited EV sales thus far in the U.S. where its debut date is thus far unconfirmed.