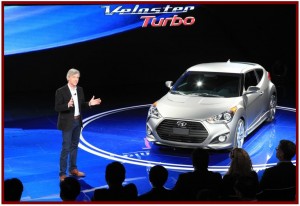 Krafcik said testing showed the Sonata battery pack can last well beyond 200,000 miles at the NAIAS.

Hyundai has announced that 2012 versions of its slow selling Sonata hybrid will come with a lifetime battery replacement guarantee to expand the benefits of its existing “Assurance” warranty. Under it all Hyundai vehicles sold in the U.S. are covered for a 5-year/60,000-mile fully transferable new vehicle warranty, Hyundai’s 10-year/100,000-mile powertrain warranty, five years of complimentary Roadside Assistance and a Trade-in Value Guarantee.The battery coverage is not transferable, and excludes lease and commercial vehicles or vehicles serviced outside the U.S.

The announcement appears to be a deft opportunistic and pre-emptive use of public relations, given current Chevrolet Volt battery fire concerns. It is also a threat to other makers with vehicles using lithium ion batteries including the Nissan Leaf and various Ford, Lincoln and Toyota hybrids as well as the Focus EV just announced. None has such a warranty. Typically their lithium-ion battery packs have what used to be termed an “industry-competitive” warranty of 8 years or 100,000 miles.

The Chevrolet Volt uses the same supplier – LG Chem – as the 2011 model Sonata Hybrid. Model year 2012 Sonata hybrid versions are just now going on sale since Hyundai is still clearing out inventories of its 2011 Sonata Hybrid. This is a rare and minor sales setback for Hyundai, which also captured the North American Car of the Car of the Year award for its Elantra compact car at NAIAS.

The lack of brisk Sonata hybrid sales reflect weak sales of other hybrids and EVs overall. They remain just 2% of the U.S. car market in spite of Toyota’s long standing dominance in hybrids and multiple offerings. Hybrid sales are also weak even though during 2011, drivers faced the highest average annual oil price in recent history.

Other versions of the strong selling gasoline fueled Sonata have been revised slightly and on sale since last fall as 2012 models. Hyundai refuses to release hybrid sales numbers, though, bundling them instead with all Sonata models – with 225,961 in total sold last year, as Hyundai set an all time U.S. sales record of 645,691. Some months the Sonata even made the Top Ten seller list, the first time a Korean maker had done so. The basic hybrid sales problem remains their price. In Hyundai’s case gasoline engine Sonata is roughly $4,000 less expensive than the hybrid, although the gap narrows to about $1,000 more for the hybrid if you buy fully loaded versions.

“The Hyundai brand was built on outstanding quality backed by the industry’s best protection program which we call Hyundai Assurance,” said Michael O’Brien, vice president, Corporate and Product Planning. “Expanding Hyundai Assurance to include Lifetime Battery Replacement Guarantee was another opportunity for us to demonstrate our confidence in the durability of our product, and pass that peace-of-mind on to our owners.”

The lithium polymers cells, from  LG Chem – the same ones also used in the Chevrolet Volt –  use a manganese spinel chemistry that provides an excellent balance between power delivery, energy density and thermal stability. Thermal stability is critical to ensuring durability eliminating the need to replace the battery pack during the normal lifespan of the vehicle.

John Krafcik, Hyundai Motor America CEO, said at a press preview at NAIAS that Hyundai testing showed the battery pack can last well over 200,000 miles. Krafcik has a reputation as being a gifted marketer, often pushing the Hyundai organization to make bold announcements before consensus is reached or as a way of breaking bureaucratic grid-lock common in the auto industry.

The electrodes in lithium ion chemistries used in portable devices expand and contract with the heating and cooling that occurs during charging and discharging. This thermal expansion cracks the electrodes, which ultimately reduces the cell’s ability to hold a charge. Manganese spinel lithium polymer cells have much lower expansion rates and are thus able to go through tens of thousands of charge cycles even without having to use a heavier, liquid cooling system. Nevertheless, Chevrolet Volt uses a liquid cooling system in its design, which the leaking and aging of the coolant is the root cause of a post rollover crash test fire that occurred three weeks after the crunched Volt was pushed out in a storage year by NHTSA. GM has since announced improved protection of the battery pack while the NHTSA investigation continues.