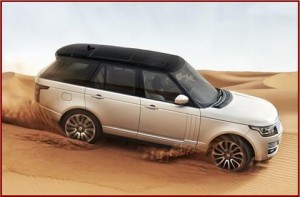 Land Rover has released the first photos of what it says is an all-new 2013 Range Rover. The fourth generation version drops its steel body for an all-aluminum monocoque design that is somewhat lighter. The upshot is vehicle weight savings of about 700 pounds on what will remain about a 5,000 pound (or more) SUV in its two V8-powered U.S. versions.

The new Range Rover was designed at Land Rover’s development centers in the United Kingdom and will be produced at a new manufacturing facility at Solihull, United Kingdom, which is said to use the latest aluminum construction technologies. Exterior styling appears mildly tweaked, with most of the effort apparently devoted to improving fuel economy.

Along with the aluminum body, new aluminum front and rear chassis sub-frames have been developed and paired with a re-tuned air suspension. The plush ride has been retained it’s claimed, while the vehicle’s handling and agility have been increased.

The new Range Rover will be available in over 160 markets worldwide, with North American customer deliveries scheduled to start in December 2012. Year-to-date Land Rover has sold 24,000 SUVs in the U.S. most of them smaller more efficient models.