A four-door by any name is a still a sedan.

Hyundai Motor today revealed images of its next-generation Sonata at the Geneva Motor Show, the eight generation of the successful four-door sedan. The Sonata claims to represent Hyundai’s (marketing babble alert) Sensuous Sportiness design concept. It is the next major revision vehicle following the release of the previous generation Sonata in 2014.

The Sonata takes some of its cues from the Le Fil Rouge concept, which debuted at the 2018 Geneva International Motor Show. Sensuous Sportiness is “defined by the harmony between four fundamental elements in vehicle design: proportion, architecture, styling and technology.” Sonata has layered crisp body lines and “pure volumes.” Concave and convex forms are also used.

The new Sonata is 30 mm lower height and a width extended by 25 mm than its predecessor. Its wheelbase is 35 mm longer, and its overall length adds 45 mm. The new Sonata’s frontal section is defined by two elements: a bold, voluminous shape evoking a smooth sphere and a cleanly demarcated hood.

The Daytime Running Lights embedded with Hidden Lighting Lamps—the first for a Hyundai vehicle—are a chief design element as it is on so many other competitors. The light architecture was initially revealed through Hyundai’s HDC-2 concept car at the Busan Motor Show in June last year.

The light architecture is also applied to the interior space with the ambient mood lamp illuminating dashboard and doors. Satin chrome accents enhance this effect. Designers compressed the height of the dashboard and HVAC vents as much as possible with light fabric colors. 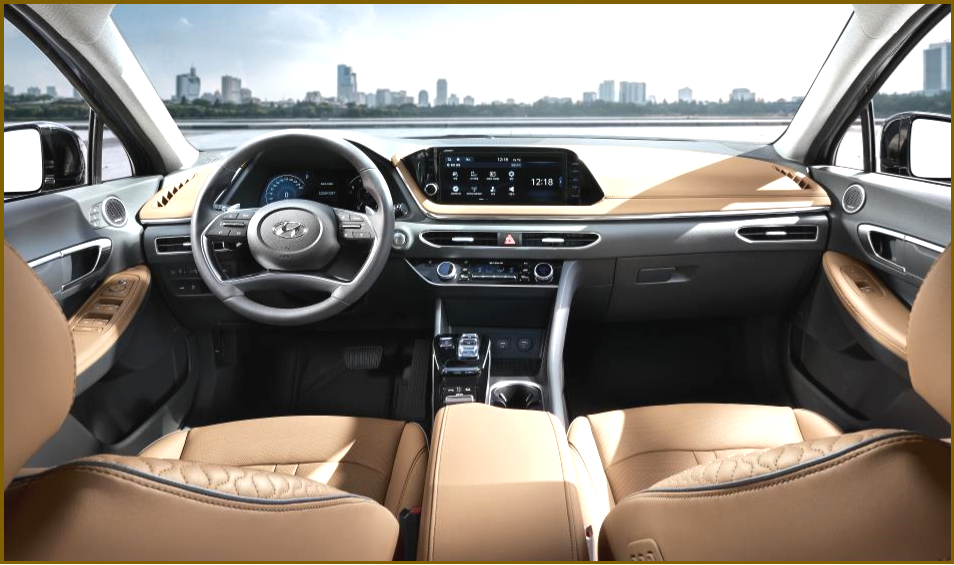 Designers claimed to alleviate the “distracting large screens” used in many luxury cars today and instead threaded the two displays together on the 2020 Sonata, using a unique S curve. These displays are seamless, with no parting lines, and have capacitive touch buttons. Additional changes include a satin chrome accent on the steering wheel and shift-by-wire transmission controls to free storage space.