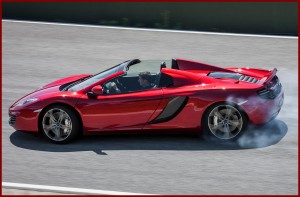 The top’s added weight effect on the performance of this 616 horsepower sports car is minimal, adding only 0.2 seconds to the coupe’s blisteringly fast 10.6-second ¼-mile elapsed time, with 0-60 mph and 0-100 mph times equal to the coupe’s.

During a road tour visiting its eight North American dealers to offer private showings to their affluent customers, McLaren stopped off in Detroit to show media its new 12C spider that debuted at Pebble Beach in August. It’s sort of pornography for the media caste, which only rubs elbows with corporate titans and the wealthy when it suits the latter’s needs. The scribblers generally have no idea how apt is F. Scott Fitzgerald’s observation about the rich, namely the people who buy such cars. They are different. The McLaren people accompanying the car, as you would expect, were polite, well informed and hospitable.

The latest McLaren is a sleek, well finished sports car, with good outward visibility and reasonable room inside – a rarity – for this type of conveyance. At $265,750 plus $2,500 delivery (plus any customization), it will also be as rare as an honest politician when deliveries start early next year.

Like Ferrari, McLaren has a strong winning record in Formula One, the mega-buck racing series that pursues technology at all costs. Unlike the Ferrari 458, its direct competitor, McLaren can boast you can be the owner a true carbon fiber car. McLaren is, of course, a carbon fiber pioneer. In 1981, McLaren introduced a carbon fiber monocoque chassis in Formula 1 with the launch of the MP4/1 race car. A decade later, the McLaren F1 introduced the advanced composite technology to road cars – 106 were produced.

Other exotic carbon fiber sports cars cost at least twice as much. McLaren’s 30 years of expertise has resulted in a mass production breakthrough of sorts, if the four-hour cycle time for producing the 165-pound ‘MonoCell’ carbon fiber monocoque chassis can be considered mass production. This feat is accomplished by a high pressure, high temperature injection molding process, which cuts 18 hours from a more typical carbon fiber process. The fiber tub is so strong that no additional strengthening is required for the chop-top spider. 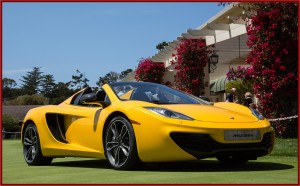 McLaren expects to sell between 1,000 and 1,500 12 C models next year depending on the direction of the global economy.

The sunshine version of the estimable12 C coupe has a retractable roof that can be raised or lowered at low speeds in seconds. This in itself might create another metric in the performance car wars since none of the other folding hard tops in the super car class can be activated in motion. “Mine goes up or down in seconds,” could become another pissing contest boast.

A complicated electric top mechanism adds 88 pounds compared to the coupe. Both use the same V8 twin-turbocharged engine mated with a 7-speed dual clutch transmission. The top’s added weight effect on the performance of this 616 horsepower sports car is minimal, adding only 0.2 seconds to the coupe’s blisteringly fast 10.6-second ¼-mile elapsed time, with 0-60 mph times unaffected, in fact, 0-100 mph times are unaffected, too.

Other than the fiber bragging rights and rarity, McLaren still faces strong competition from the Ferrari 458 – see the current issue of Road&Track for a detailed instrumented test of the two super cars. Exec summary – it is a coin or rather a trust fund toss.

This has made for a healthy streetcar business for the British company, and McLaren expects to sell between 1,000 and 1,500 12 C models next year depending on the shape of the global economy. The spider, at least at first, should dominate the order book. There are also more derivatives in the works from the architecture, with McLaren claiming that it will build 4000 sports cars annually by the middle of the decade. Another concept will likely appear at the Paris Motor show at the end of September.