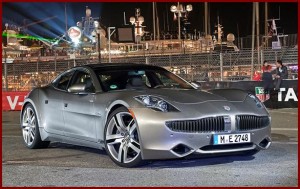 Posawatz is the third Fisker CEO this year, so far.

Fisker Automotive today named Tony Posawatz, the former head of the Volt program at General Motors as its new Chief Executive Officer, its third CEO this year. The current CEO Tom LaSorda will stay with the company in an “advisory” role. LaSorda was only appointed CEO in February 2012 after joining Fisker two months previously. Fisker stopped work on a plant in Delaware this spring since it couldn’t meet the terms for more funding under a Department of Energy loan worth $529 million.

In a statement the controversial loss-making company – it has never earned a profit since its 2007 inception with sales of 1,000 cars – said Posawatz is a veteran with more than 30 years of experience in product development, strategy, program management, manufacturing and quality at General Motors.

Posawatz’s last role was as GM’s Vehicle Line Director and key leader of Global Electric Vehicle development, where he was responsible for the award-winning Chevrolet Volt – bringing the car from concept to production.

“Tony is the perfect CEO for Fisker,” said Tom LaSorda, who may or may not remain as chairman. “He has been at the forefront of the industry’s technological revolution and one of the few people in the world to bring an EV to mass production. Part of my assignment at Fisker was to recruit a long-term CEO and I cannot think of a better person than Tony to take us forward. He is a real product guy for a product driven company.”

“Joe is a seasoned veteran and someone that I have worked with for more than 20 years,” said Tom LaSorda. “He has outstanding experience in China and will be a great leader to launch the Fisker brand in both China and the rest of Asia.”

Fisker also announced the appointment of Alberto Gonzalez as Vice President of Manufacturing. Gonzalez brings more than 30 years of global automotive manufacturing and assembly experience from Chrysler where he operated high-volume assembly plants in the US, Mexico and Canada.