Ford Places $1B Bet in Argo AI on Autonomous Vehicles 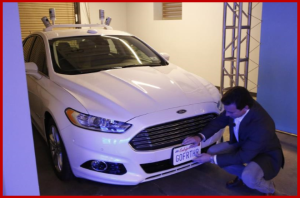 Ford Motor is investing $1 billion during the next five years in Argo AI, a startup company with robotics experience and artificial intelligence software, in a claimed attempt to advance its autonomous vehicles programs. Founded by former Google and Uber leaders, Argo AI will include roboticists and engineers from inside and outside of Ford working to develop a new software platform for Ford’s fully autonomous vehicle coming in 2021. (Ford Wants Fully Autonomous Ride-Sharing Car in 2021)

Argo AI employees – through their equity participation – will share in the startup’s success or failure. This development might be one reason Ford is pessimistic about its 2017 earnings after two straight years of record industry sales.  Others could include major recalls and litigation, or an additional major acquisition. (Ford Motor Says 2017 Profit Will be Lower Than 2016, Ford Settles Navistar Diesel Class Action in Canada, Three Ford Recalls in North America on +400,000 Vehicles)

“As Ford expands to be an auto and a mobility company, we believe that investing in Argo AI will create significant value for our shareholders by strengthening Ford’s leadership in bringing self-driving vehicles to market in the near term and by creating technology that could be licensed to others in the future,” said Ford President and CEO Mark Fields, who is under criticism from some shareholders for Ford’s languishing stock price.

The current programmers developing Ford’s autonomous vehicles – the machine-learning software that acts as the control of autonomous vehicles – will be combined with the robotics knowledge of Argo AI. Ford claims it will continue the development of its purpose-built autonomous vehicle hardware platform, as well as on systems integration, manufacturing, exterior and interior design, and regulatory policy management.

“We are at an inflection point in using artificial intelligence in a wide range of applications, and the successful deployment of self-driving cars will fundamentally change how people and goods move,” claimed Salesky.

By the end of this year, Argo AI expects to have more than 200 employees based in the company’s Pittsburgh headquarters, in Southeastern Michigan and the Bay Area of California. Argo AI’s initial focus will be to support Ford’s autonomous vehicle development and production. In the future, Argo AI could license its technology to other companies and sectors looking for autonomous capability.