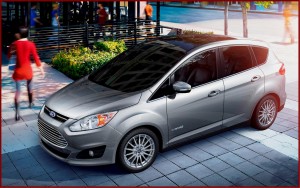 The Prius brand – Prius, Prius v, Prius Plug-in and Prius c – accounted for a combined April sales volume of 25,168 units. No other company was even close.

Ford Motor Company said today that the 2013 Ford C-Max compact hybrid utility vehicle will be available this fall with a base price of $25,995 – more than $1,000 lower than the Toyota Prius V base price. Whether this makes any sales difference in the marketplace against the formidable  – and market dominating – Prius lineup remains to be seen.

The C-Max Energi plug-in hybrid will follow later this year with what was claimed to be better electric-mode fuel economy and overall driving range than the Prius plug-in hybrid. Ford, badly lagging Toyota the global hybrid sales leader, however did not provide fuel economy or sales estimates.

More than 156,000 units of the gasoline version of the C-Max have been sold in Europe since its 2010 launch. Ford originally planned to bring a larger 7-passenger version of the gasoline vans to the U.S., but has since scaled the program back to a small volume 5-passenger hybrid program. It is really a minivan version of the Focus, and one of several electrified vehicles Ford plans to produce in North America in 2012. In addition to C-Max Energi, the other vehicles include Focus Electric, Fusion Hybrid and Fusion Energi plug-in hybrid.

Prius was the world’s first mass-produced hybrid gas-electric vehicle, and in its third generation is unquestionably the most successful hybrid, which continues to give Toyota a halo reputation as an environmentally responsible company.

Nobody else was even close. The Honda Insight and Civic hybrids were at ~1,500 vehicles. Nissan, which scorned the fuel saving hybrid technology two decades ago and is now attempting recover with pure EVs, sold, ahem, 374 Leaf electric cars, down 35% from 2011.