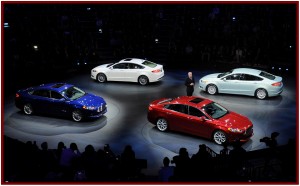 The Fusion is aimed at the heart of the family car market long dominated by the Japanese Three – Toyota, Nissan and Honda – all of whom historically provide a lower overall cost of ownership, higher quality and customer loyalty. Two Fusion recalls thus far aren’t a good start.

Ford Motor Company will change engine control computer software to stop fires on 2013 Escape SUV and Fusion sedan models- both redesigned for 2013. At the end of November Ford recalled two of its best selling vehicles when equipped with a 1.6-liter engine without having a fix after at least 13 fires were reported.

Ford said it would make “software updates” to the cooling system of the 1.6-liter engine available in the SE and SEL models of the Escape and 2013 Fusion. The software updates are claimed to manage engine temperatures during a “unique overheating condition.”  In a release, Ford said the original cooling system design was not able to address a loss of coolant system pressure under certain operating conditions, which could lead to a vehicle fire while the engine was running.

This is the fourth major recall on Ford’s all-new Escape SUV. The previous ones occurred because a manufacturing defect at its engine plant in Bridgend, United Kingdom caused a coolant leak and overheating from the 1.6-liter engine; defective fuel injection lines that can cause fires; and a final assembly problem in the U.S. that potentially caused unintended acceleration.

Beginning early next week, customers will be able to get the software update at their dealer. The time needed for this repair is less than one-half day. However, due to service scheduling requirements, a dealer may need the vehicle for a longer period, according to Ford.

Until the cooling software is updated, customers driving vehicles equipped with the 1.6-liter engine have been told to park the car and to contact their dealer to arrange for other transportation at no charge.

Drivers whose cars burned have said a message was displayed saying, “Engine Power Reduced to Lower Temps” or “Engine over temp, stop safely.” Some also said that their instrument clusters sounded a chime and illuminated a red light. Ford advised drivers who see any of these indications to get off the road as soon as possible, turn off the engine and exit the vehicle.