Posted on 7 January 2011 by Kenneth Zino 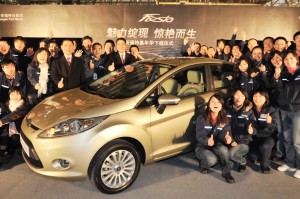 Under Chinese government policy, access to the world’s largest auto market is only granted if makers establish joint ventures with local companies.

Ford Motor Company has posted a record year in China, selling 582,467 units in 2010, a 40% increase compared to 2009.  Nonetheless the Number Two U.S. automaker still lags far behind cross town rival Genera Motors in China, which sold a record 2,351,610 units in 2010. GM has been the Number One automaker in China since 2005 when GM surpassed the Volkswagen group.

Ford had a late start gaining access to the auto market in China, the result of a Chinese government decision that chose a Buick sedan from GM over a Ford Taurus as the vehicle that would enter production at a joint venture in Shanghai. Since 1999, Chinese versions of the Buick Century and Regal sedan have established Buick as one of the top brands in China.

Ford was years behind when it finally opened Changan Ford in 2003, a joint venture with a former Chinese armaments supplier in western China. Under Chinese government industrial policy, access to the world’s largest automarket is only granted if automakers establish joint ventures with local companies. The Chinese communist party also effectively controls the hiring in joint-venture plants.

Ford continues to expand in China. Last year with its partner JMC, Ford began construction of the $ 300 million plant in Nanchang for Ford and JMC-branded vehicles. Changan Ford Mazda Automobile signed a memorandum of understanding to build a $500 engine plant in Chongqing, where a second CFMA assembly plant is currently under construction. (See Ford to Build a Second Engine Plant in China)