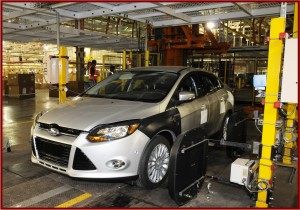 The more the U.S. market recovers, the worse it will become for automakers without capacity.

Ford Motor Company will produce about 40,000 additional vehicles this summer by idling 13 plants, including six assembly plants, for just one week instead of the traditional two, the U.S.’s Number Two Automaker said today.

It looks like Ford will lose market share this year as the market grows because Ford is already running its North American plants at maximum capacity, and it has two high volume model changes in process – its best selling Ford Fusion and Lincoln MKZ mid-size models, which go on sale as 2013 models later this year. The cancellation of the Crown Victoria, Lincoln Town Car and Ranger pickup truck adds to the capacity problem.

Ford Motor’s U.S. sales decreased 5% in April to 179,660 vehicles in a market that was up 2.3%, in part because its plants were running flat out. Ford is now facing a strong challenge from Number Three Toyota Motor Sales, which reported April sales of 178,044, up 12% y-o-y. Year-to-date, Toyota Motor trails Ford Motor by 52,000 cars and light trucks, a gap that decreases each month.

“Requiring more capacity from our plants is a good problem to have and having the flexibility to add a week of production in our plants goes a long way toward solving it,” said Jim Tetreault, vice president of North America Manufacturing.